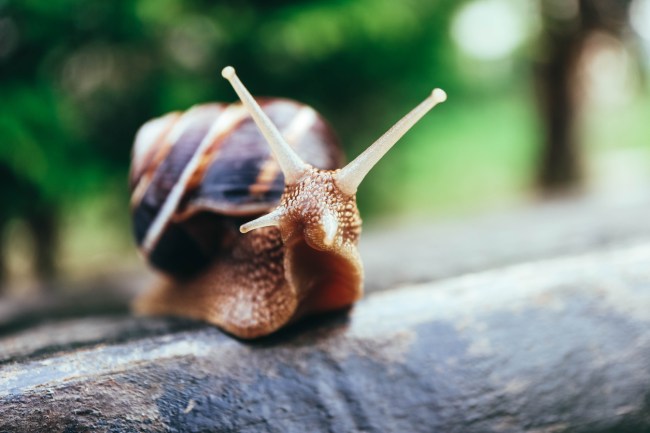 Are you ready to watch a crazy video that is one part frightening, one part perplexing, one part beautiful and one part mesmerizing? Well, lucky for you there is such a video and it features a brightly colored zombie snail, but all is not as it seems.

Biologist Mike Inouye shared a video of a seemingly flickering snail on the ground. This particular curious creature is known as a “disco snail.” But a disco snail is actually dead and is “brought to life” by a parasitic worm.

Leucochloridium paradoxum AKA the green-banded broodsac is a parasitic flatworm that purposely invades the bodies of land snails. The body-snatching parasites take over the snails from the inside because they want “BRAINS.” Actually, they want to be eaten by birds.

RELATED: Texas Woman Shares Video Of Spider Catching And Eating A Bat On The Side Of Her House

The Leucochloridium trick the snails to venture into open areas that are well-lit. The worm creeps into the snail’s eyestalks, wriggle around like a caterpillar to capture the attention of birds.

Birds peck the snail’s eyes out and eat the parasitic worm. The worms breed inside the bird’s intestinal tract and lay eggs that are released in the bird’s crap. Imagine the pressure to perform sexually inside a bird’s stomach before you get crapped out?

The bird feces is then consumed by gastropods, which allow more parasitic worms to get into the body of the snail. To quote Elton John, “it’s the circle of life.”

Amazingly, the snail usually survives these traumatic zombie attacks and even grow back their lost tentacles and eyespots thanks to their incredible regenerative abilities.

The internet was disgusted yet bewildered by the zombie snail and Inouye’s tweet went viral, receiving nearly 40,000 RTs and almost 100,000 Likes in two days. Most of the responses to the tweet were people freaking out over the disco snail. Nature, you crazy.

This zombie snail. A parasitic worm Leucochloridium has taken over its motor functions and eye stalks, making them into caterpillar mimics so birds will eat them. The worm can then reproduce in the bird's GI tract, eventually transmitting via its faeces 🤯 https://t.co/mP8IrGh21L pic.twitter.com/C2xc83oU54

RELATED: Pentagon May Have Created Weaponized Ticks And Released Them Into The Wild