This Video Of Paris Hilton’s Brother Getting Arrested Is 500 Levels Of WTF? 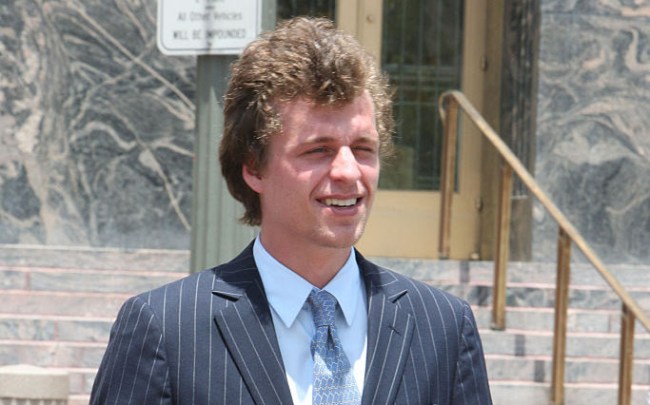 Paris Hilton’s younger brother Conrad Hilton (pictured above leaving court after sentencing for causing a disturbance – to put it mildly – aboard an international flight) was arrested over the weekend.

The 23-year-old Hilton allegedly trying to break into the home of actress E.G. Daily at 4 AM, violating a restraining order E.G’s daughter Hunter Daily Salomon has against him.

If the name Salomon sounds familiar that’s because Hunter’s dad is Rick Salomon, AKA the guy who helped start the celebrity sex tape craze by banging Conrad’s sister Paris on video in the 2003 thriller 1 Night in Paris. I don’t make this stuff up, folks.

Now, as for Conrad’s arrest. Naturally, this being 2017, it was all caught on video – and ohhh boy, is this video a doozy.

During the course of his arrest, Conrad (1) accused one of the officers of touching his penis, (2) screams a homophobic epithet, (3) screams rape, and (4) according to TMZ, who spoke to law enforcement, he also used the n-word.

But wait, here comes the best part. You ready?

He also yelled out, “I’m Conrad motherfucking Hilton, don’t you forget it.”

Oh, we won’t forget it, Conrad, of that much you can be certain.

Hilton was booked on charges of grand theft auto because, get this, he drove to E.G. Daily’s house in Rick Salomon’s Bentley, which he stole from Salomon’s home before heading over to Daily’s.

Watch and be amazed…

Oh, by the way, this is Hunter Daily Salomon, the woman Conrad was going to great lengths to connect with…