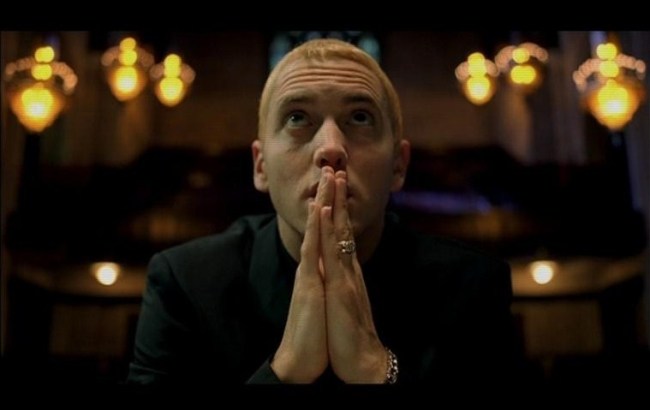 “The Eminem Show” was released on May 28, 2002, and Eminem is celebrating the 15th anniversary of the classic album. Marshall Mathers hyped that he was doing something special for the anniversary leading many to believe he was releasing new music, such as possibly a “The Eminem Show 2,” or maybe he was announcing a new tour. Sadly, we will get neither right now.

For the 15th anniversary of “The Eminem Show,” Slim Shady released a series of bundles featuring merchandise that celebrates his fourth studio album. Eminem has reissued a cassette of the LP and is selling t-shirts and autographed 24″ x 18″ posters that have handwritten annotations of its liner notes. The products are only available until Saturday (June 3).

The Detroit rapper also explained that the inspiration for “The Eminem Show” was the movie “The Truman Show” starring Jim Carrey.

“The concept for The Eminem Show was inspired by The Truman Show because my life felt like it was becoming a circus at that time and I felt like I was always being watched. Basically, Jim Carey wrote my album.”

“The Eminem Show” is diamond certified with over 10 million units sold in the United States. The album is considered Eminem’s most personal album and it delved deep into his dark, violent, and sometimes comical alter ego, Slim Shady.