Lindsay Lohan Might Be Losing Her Mind, Says She Was ‘Racially Profiled’ At An Airport, Among Other Things 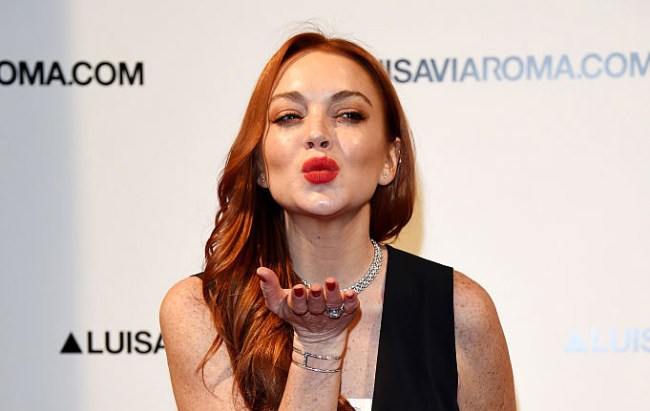 Lindsay Lohan has said and done some VERY crazy shit this past week. No, I mean like more than usual. We’re talking about LiLo edging towards 5150: involuntary psychiatric hold level crazy.

Let’s go through the timeline of her last five days, shall we?

First, Lindsay Instagrammed a photo of herself showing off her boobs accompanied by a quote from Mother Teresa, as one does…

Then she revealed that she is under the delusion that Disney might actually consider casting her as Ariel an a live-action version of The Little Mermaid.

The caption on that photo, which now says, “#thelittlemermaid,” originally read…

“I will sing again, as #ariel #thelittlemermaid,” Lohan wrote on Instagram Saturday, alongside a side-by-side pic of her and the animated mermaid princess. “@disney approve that “#billcondon directs it along with my sister @alianamusic singing the theme song for the soundtrack.”

“Also @kgrahamsfb plays Ursula,” the actress continued, referring to a trainer and CrossFit enthusiast. “Simply because, she is the best. Take one. @disneystudios.”

Now today Lindsay appeared on Good Morning Britain (why, I have NO idea) and said that she believes that she was racially profiled when she flew to New York recently. This despite the fact that, you know, she’s like the whitest ginger on the planet.

“When I was flying to New York recently I was wearing a headscarf and I got stopped at the airport and was racially profiled for the first time in my life. [The agent] opened my passport and saw Lindsay Lohan and started apologizing but said, ‘Take off your headscarf.’ I mean, it’s OK. But what scared me was that moment, how would another woman who doesn’t feel comfortable taking off her headscarf feel? That was really interesting to me. I was kind of in shock. It was strange… I’m from New York, born and raised. I was a little intimidated.”

No, really, she actually said that… listen.

Umm, that’s not the definition of racial profiling, sweetheart. I know claim to be studying the Quran, but you are a white girl from Long Island.

Oh, and in case you were curious about Lohan’s thoughts regarding our new President, and who isn’t, she also had this to say about 45…

“People are making it overly dramatic,” said Lohan. “What’s the point in picking on someone in case of just seeing what they’re capable of, or not capable of?”

Ah, there’s the voice of reason we’ve all been looking for, folks. Good thing she was recently invited to speak at the United Nations, huh?