Marvel Studios President Says Phase 5 Has Already Been Planned, Next ‘Avengers’ Will Be ‘Very’ Different 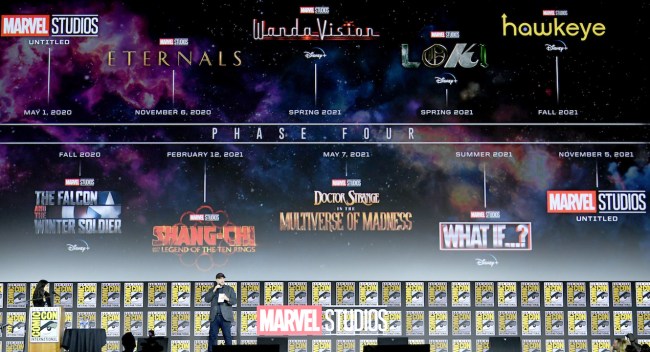 This past weekend, Marvel Studios showed up to Hall H at San Diego Comic-Con and absolutely brought the house down by finally announcing their Phase 4 slate of films and TV series.

As a quick refresher, here’s everything that Marvel Studios announced at Comic-Con:

– The Falcon and The Winter Soldier

– Shang-Chi: And The Legend Of The Ten Rings

– Doctor Strange: In The Multiverse Of Madness

– Guardians of the Galaxy 3

While Marvel just provided updates on their next 15 projects — including 10 that will come out between now and 2021 — they’re already thinking about what comes next, according to Marvel Studios president Kevin Feige.

Speaking to MTV’s Josh Horowitz, Feige said that the future of the Marvel Cinematic Universe is so extensively planned that they debated unveiling Phase 5 at Comic-Con as well.

“We debated what we should announce today. Should we announce 4 and 5? We’ve planned them out, we’ve got five years down the road and I was like, I think eleven projects in two years is plenty, having not mentioned anything for two or three years,” Feige said.

Given that Black Widow, Eternals, The Falcon and The Winter Soldier, Shang-Chi, Wandavision, Doctor Strange 2, Loki, What If…?, Hawkeye, and Thor are all confirmed for Phase 4, that leaves massive projects such as Captain Marvel 2, Black Panther 2, Guardians of the Galaxy 3, Blade X-Men, and Fantastic Four for Phase 5.

Given the introduction of various new heroes into the MCU — in addition to Anthony Mackie taking over the shield of Captain America and Natalie Portman taking over the hammer of Thor — Feige also revealed that the next Avengers team will be a “very different team than we’ve seen before.”