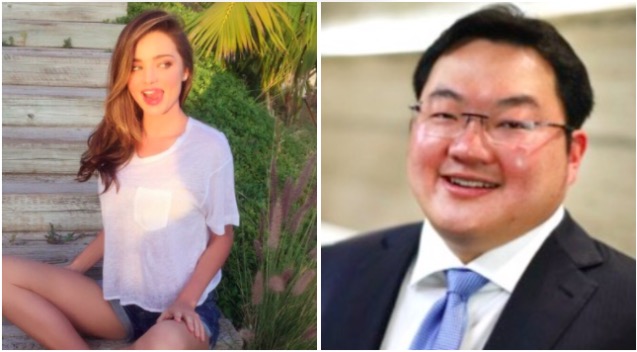 1Malaysia Development Berhad is a Malaysian development fund set up to promote economic development projects in the Asian nation. The monster fund was established on loans of upward of $17 billion under the pretense that the money would be used responsibly and for the greater good.

Well, people are greedy and now U.S. authorities allege that the fund was merely a front for the biggest international embezzlement scandal in living memory, 9Finance reports.

The engine behind the scheme is Malaysian billionaire known as Jho Low, a party animal with strong ties to Hollywood who used his alleged share of that money to fund his extraordinary lifestyle and finance Hollywood blockbusters and woo supermodels with jewelry.

We’ll start with how this portly dude was able to date supermodel Miranda Kerr (who is now married to another billionaire, Snapchat founder Evan Spiegal).

After Kerr divorced Orlando Bloom in 2014, Low swooped in and began showering the Australian model with millions of dollars worth of diamonds, using stolen cash from the fund, News.com.au reports.

For his very first gift, Low told his New York jeweller, Lorraine Schwartz, that he had “$1-2 million” to spend and that size matters.

That gift — an 11.72 carat heart-shaped diamond that he bought for $US1.29 million — came in time for Valentine’s Day, shortly after Kerr’s divorce.

…he chose the diamond and instructed the jeweller to inscribe it with Kerr’s initials, MK.

That was just the beginning.

In November 2014, Low plunked down $US3.8 million as partial payment for an 8.88 carat diamond pendant from Schwartz valued at around $4.5 million that he gave to Kerr as a gift.

Kerr was evidently enamored with the gifts and allegedly began dating Low for a year.

But it doesn’t end there. Jho Low even sunk his teeth into other Hollywood elite, namely Leonardo DiCaprio.

Low spent millions to fly with Leonardo DiCaprio around the world and gamble with him, the government alleges. He also gifted Leo with over $13 million worth of art  that had been gifted to him by a Hollywood production company, Red Granite, which funded the movie, The Wolf of Wall Street. All used with money stolen from the people of Malaysia. You can’t make this shit up–The Wolf of Wall Street was funded with dirty money.

On Thursday, DiCaprio announced through a spokesman that he was returning more than $13 million worth of art that was gifted to him.

The U.S. Justice Department is seeking to recover $540 million in assets, including penthouse apartments, paintings by Vincent Van Gogh and a yacht known as the Equanimity, that it says were stolen from Malaysia’s troubled sovereign wealth fund, prompting objections from Malaysian officials who said Friday there was no evidence of such crimes.

So while those Hollywood stars condescendingly talk down to us at those award shows for not supporting their social cause, just remember, many of them engage in shady ass deals that put less fortunate people at a disadvantage.