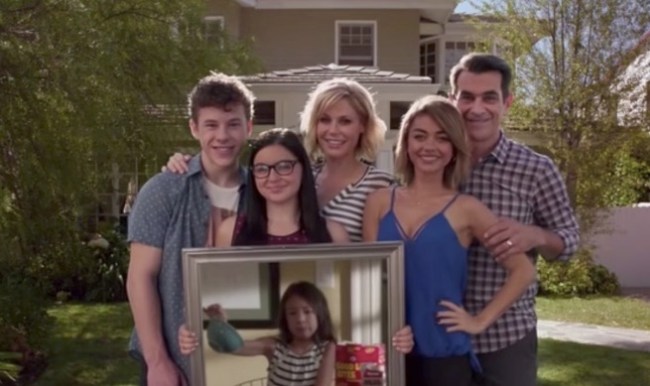 The entire cast of ‘Modern Family’ just got raises after signing contracts that lock them up through Season 10 (Season 9 premieres on September 27th). The ‘kid’ actors (Alex, Luke, Haley, and Manny) are now making so much money they’ll never have to work a single day after they leave the show at some point in the distant future.

There were 22 episodes in Season 8 of Modern Family. As is the case with almost every TV contract, the actors are paid per episode. According to Deadline, under the new contracts, Ariel Winter, Sarah Hyland, Rico Rodriguez, and Nolan Gould will each make more than $100,000/episode. There are 22 episodes slated for Season 9 and presumably the same amount for Season 10. That means the ‘kid’ actors of Modern Family will each make AT LEAST $4.4 million over the next two seasons (before taxes).

The older cast members of Modern Family also got raises and they’re making a fuck ton more than the kids. Sofia Vergara, Julie Bowen, Ed O’Neill, Ty Burrell, Jesse Tyler Ferguson, and Eric Stonestreet will each make ~$500,000/episode for Season 9, which according to Deadline is a ~40% increase of their previous salaries of $350,000/episode. This means the older cast members will earn over $22 MILLION before taxes over the next two seasons.

These are outFUCKINGrageous salaries, but it’s hard to deny that the cast members aren’t worth it. Year after year, Modern Family dominates the awards shows. It’s a VASTLY SUPERIOR show to The Big Bang Theory whose primary cast members earn $1 million per episode. Frankly, I’m shocked that the adults aren’t making $750K/episode and the kids aren’t making over $500. The pay gap there seems unnecessary.