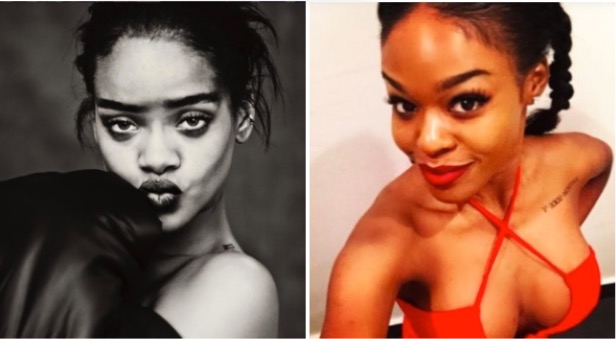 Are you capable of naming on Azealia Banks song? I cannot. I do remember her making waves last year when she called for Sarah Palin to be gang raped by the ‘burliest black men’ after a SATIRICAL news site quoted Palin as saying, ‘Slavery wasn’t forced onto African-Americans, they accepted it willingly.’ Or that time Russell Crowe had to literally toss Banks out of his party after she threatened to stab his dinner guests.

So, it’s safe to say that this chick is insufferable and incapable of making headlines without piggybacking on the likeness of real stars.

Banks has made headlines once again, this time using one of the biggest stars on the planet as her muse. In wake of Trump’s executive order to ban non-U.S. citizens from seven majority Muslim nations from entering the U.S. for 90 days, Rihanna took to Twitter to air her grievances.

Disgusted! The news is devastating! America is being ruined right before our eyes! What an immoral pig you have to be to implement such BS!!

Banks, who is a staunch Trump supporter who went on the record to say that Hillary Clinton talks to black people like ‘pets’, posted a rambling Instagram message telling Rihanna to STFU.

Rihanna, who could have easily just ignored this troll’s gimmick for attention, shot back.

The hashtag #stayawayfromthechickens is referring to the news that broke in December that Azealia Banks has been sacrificing chickens for three years in an effort to practice witchcraft.

Rihanna also hit her with this.

Banks, excited for the attention, has gone ballistic on Instagram. Here are just a couple of the batshit posts she’s put up in response.