15 Things We Miss About Ron Swanson 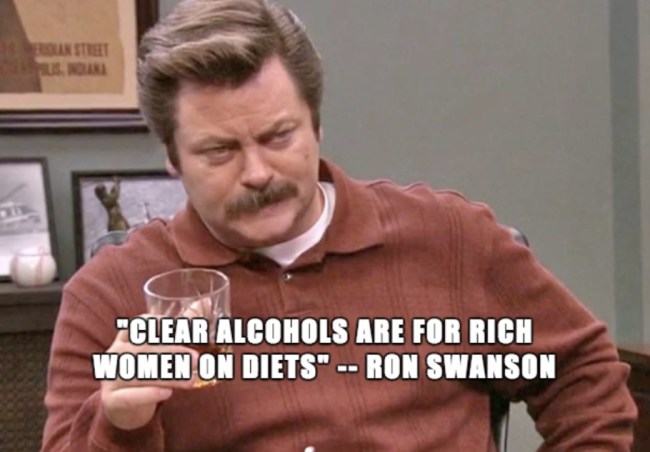 We can all agree that NBC’s Parks and Recreation, which signed off last night, is one of the greatest sitcoms ever.

With that said, it had one indelible ingredient that pushed it to that premier level of comedic satisfaction: meat, lots of it.

OK, fine, obviously I’m trying to avoid being overly sentimental here (it doesn’t fit any man well), but I can’t beat around the bush forever. Ron Swanson is what made bros everywhere tune in, or binge watch, Parks and Recreation.

He’s the shows legacy — whichever way you try to slice it. End of discussion.

Oh, but if it were that neat and easy of a conclusion. Unfortunately, it’s not (sorry, Ron).

We’d be remiss if we didn’t take the time — on the day after Parks brilliant swansong — to list what we appreciate most about Nick Offerman’s classic character.

From his Bob Knight-emulating basketball speech early in the series to his final address last night as the new leader of the Pawnee National Park, Ron Swanson was always the master of motivating people to do whatever it was he wanted them to do — which, most of the time was not much (more on this later).

In short, he’s the best boss TV’s ever created.

(Note: He’s also extremely effective when addressing only the camera in a monologue).

As much as we’ll celebrate Swanson for his meat-loving and whiskey-drinking behavior (it’s coming, don’t worry), we can’t deny that what made the made the man a legend was his wisdom. He always gave the right advice and always ended up walking away from the situation as the winner — never looking like a buffoon like some of his co-workers.

Ron hates politics, and government, so to frame this as anything other than the brief headline “views” would be something that directly tarnishes his perfect attitudes toward the world.

While most people’s go-to for Swanson’s views on government is the clip about him running the parks department as a Chuck E. Cheese, I much prefer his grinning face to getting the news that the whole city of Pawnee is going to be shut down.

His thoughts on budget cuts are also to be applauded again and again.

The finest wood-worker TV has ever seen — and will ever know, Swanson definitely was a dedicated craftsman. Some of his funniest moments came repairing broken objects or honing his woodworking skills.

Hell, the man even admitted, so eloquently, that his two hobbies were woodworking and lovemaking. Can’t hate a man for doing what he loves.

Where to begin? Here’s a good clip that summarizes Ron’s tastes.

He detests vegetables, skim milk and frozen yogurt with as much fervor as he loves bacon, eggs, steak, shrimp and whiskey. I can say that Ron Swanson had me a believer very early on in the show’s first season but it was when he demanded all of the bacon that I knew that he was someone I’d willingly fight side by side next to in a trench.

Of course, this clip of Ron re-acting to “Vegan Bacon” is a must watch.

In case I didn’t touch upon Ron’s love for alcohol in that last bit, here’s a great clip about how a Swanson handles himself after a long night of drinking. (Hint: it involves eating meat and not complaining like a wispy little boy.)

And I’d be a modern day criminal if I typed the words Ron Swanson and alcohol and didn’t provide a link to this bit of genius (perhaps the funniest moment of the series).

7. Dealing with the ex-wives

You only need to watch about 30 seconds of this clip to re-fall in love with Ron Swanson. The way the man can detect one of his two ex-wives by just a faint scent is comedy at its highest peak. It adds yet another element to his already dynamic arsenal of character traits.

Besides woodworking and lovemaking, Ron’s perfect day consists of fishing on the lake, walking around nature and drinking Lagavulin. Do I even need to say anything more about the man’s ambitions? Didn’t think so.

Again, I’d be failing everybody reading this if I didn’t mention that part of what makes a Swanson a Swanson is having an absolutely behemoth of a mustache and a consist wardrobe that’ not too flashy. (Ron without a mustache is just Ron, and that’s a tragedy). Also, wearing a Tiger Woods’ golf shirt after you have sex is an awesome touch. It let’s everybody know you’re in a good mood and are approachable that day. Everyone should follow this method.

Forgive me if these all seem to roll into one another, but Ron’s traits — and his likability — just makes it that much easier to breakdown what makes him great.

Anyways, there’s a difference in a Swanson’s physical appearance (noticeably irritated and guarded with great facial hair) and a Swanson’s view of himself. Be confident men; be confident — that’s what Ron has taught us time and time again. That, and emotions are for the weak.

We did a nice job covering this in ambitions, but again — there’s a difference between what you would like to do in your free time and what you do when you’re on the clock and working for the man.

Ron championed the belief that working hard at a job you hate — and don’t believe in — should never be a pillar of what makes a man.

Here’s Ron Swanson on why doing nothing is an important ethos.

Similar to his ambitions, Ron is very straightforward in his attitudes toward others.

While the bacon and eggs bit and the government shutdown smile will always have me busting at the seems, I’d be lying if I said I don’t use the phrase “work proximity associate” every day of my miserable life. It perfectly summarizes how everyone feels about those they work with on a daily basis.

Note: Ron’s secretary — the fact he wants nobody to know he’s Duke Silver — is very much included in this philosophy.

I loved the bit last night about Ron diversifying his portfolio. It reminded me that Swanson’s finances were all brilliantly invested in gold and buried in random parts of Pawnee. They can’t have your money if they can’t find it — remember that one, boys.

We touched upon this a bit in No. 1 but I’d regret not saying that one of the things I appreciate about Ron is his candor. From dismissing co-workers by the wrong name when they get too chummy to his blunt letter to Canada, Swanson always was able to articulate his feelings in the fewest words possible. (Even his own will.)

Obviously, this is something I still need to work on.

If bros everywhere didn’t already know it, Swanson showed every dude across the country that cooking is cool as long as it involves a grill and some meat.