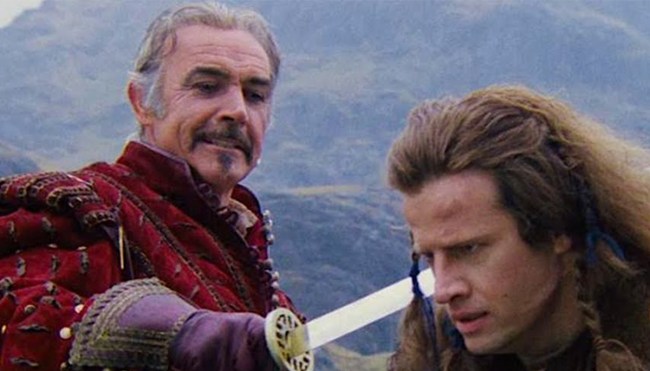 Despite the fact that he was kind of before my time, I’m a big fan of the late, great Sean Connery fan. The first movie I ever saw him in was Indiana Jones and the Last Crusade, but yah boi was hooked after that. I think I ended up watching all of his James Bond movies in like a week.

However, I was never really a huge proponent of his turn as the immortal Egyptian swordsman Juan Sánchez Villa-Lobos Ramírez in Highlander. I feel as if the whole role is kind of phoned in. Which, for all intents and purposes, it was, mostly because he filmed all of his scenes in a week for a cool million-dollar payday.

That all being said, I’m really not all that surprised to learn interviews The Guardian conducted with both actor Christopher Lambert and the director Russell Mulcahy seem to indicate Connery was drinking a lot while on set in Scotland.

That latter notes he wasn’t very shy about it and cited the flight the two men took to Scotland when Connery was drinking openly and extended the invitation to Mulcahy:

“We shot fast – in Scotland, London and New York. The budget was just $13m so it was guerrilla-style film-making. When we were in Glen Coe, the producer had to run down the mountain with a pocket of change to call the studio from a phone box.

On the plane up, Sean brought out a bottle of homemade scotch a friend had given him. “C’mon, laddie,” he said, “have a nip of this.” It blew my brains out.”

Well, that’s not good. Maybe that’s why this movie’s a bit all over the map: if the director of the film was drinking whatever fermented firewater Connery found pooling underneath his refrigerator. I’m surprised the fume didn’t get the pilot drunk.

In Connery’s defense, the production sounded a tad haywire, leaving him with plenty of excuses as to why he needed a drink.

“”When Sean and Clancy Brown, who plays the villain, had their first big fight, Clancy was meant to burst in and slice the table in half with his sword. But he struck it with the flat of the blade and it broke. A shard shot over Sean’s head.

He was on the verge of walking. He put on his dressing gown and called a meeting. Clancy said: “I’m so sorry. I was so nervous because it’s Sean Connery.” Sean was gracious but said: “Maybe we’ll use my stunt double more.”

There was very little CGI in those days. But because I grew up in theatre, I knew a lot about tricking the eye. For the fights, we strapped car batteries to the actors’ legs and wired them up so they’d spark when a sword struck. After about three takes, the sword handles would get really hot and we’d have to stop.””

Listen, I understand the concept of suffering for your art, but a completely scorched and scabbed palm from burning hot metal sounds pretty unbearable. If I were Sean, I’d probably throw a few back in the evening as well just to make a different part of my body hurt.

Really, though, the funniest part of the whole thing was that after Connery left the set, a rule came down the production pipeline that no one was allowed to drink before battle scenes since they were essentially using real swords.

However, as Lambert tells it:

“It was my first time in Scotland. Insurance people completely forbid drinking on set, but try that up there and you’ll get shot. I’m not saying Scottish people drink all the time, but if they drink, they drink. It’s not a sip of wine, it’s a quarter of a bottle of scotch. There were 1,000 extras for the battle scenes and they went at it for real. After each shot, the cries went up: “Doctor!” “Nurse!””

That’s bananas. Guys just getting drunk as piss and then hitting each other with real swords. No wonder Connery was in and out in a week flat.