Steve Harvey Has Officially Embraced His Role As Villain, Bailing On His Own Show’s Wrap Party Tonight 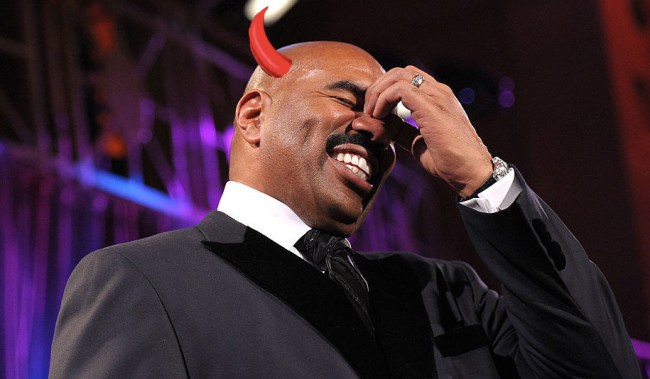 Following the widely distributed all-hands memo that urged the employees of his show to leave him the fuck alone, Steve Harvey will not be attending the wrap party in Chicago tonight as send off celebration before the show moves to Los Angeles.

A source told Page Six, “Steve is not going to his own wrap party Thursday night . . . After that memo, he’d be stood on his own in the corner. He used to be such a nice guy.”

The wrap party, which will reportedly be on a luxurious boat in Chicago, has already been met with some controversy after some employees who were fired before the move to L.A. were disallowed from attending the party because ‘they don’t have enough seats for everyone.‘

Harvey also skipped out on a going away BBQ that was held for staff earlier this week. One employee who has worked under Harvey for years, says most employees have soured on the boss:

“Most people were like, whatever. It seems like almost nothing is too low for him at this point.”

In addition, the source claimed, staff were given “a box with wooden Chicago coasters” as a going-away gift, along with “a bottle of bourbon or whiskey.”

Despite receiving backlash from all corners of the internet, Harvey has stood by his brashness. He said: “I just didn’t want to be in this prison anymore where I had to be in this little room, scared to go out and take a breath of fresh air without somebody approaching me, so I wrote the letter.”