Steve Harvey Is Tweeting About Last Night’s ‘Best Picture’ Mess Up At The Oscars, Has Advice For Warren Beatty

I actually turned The Oscars off last night before Warren Beatty announced the ‘Best Picture’ award winner and all hell broke loose. If you haven’t seen/heard by now, La La Land was mistakenly announced as ‘Best Picture’ when Moonlight was the real winner.

The story we are being fed at the moment is that Warren Beatty was handed the wrong envelope, an envelope for another category, and that’s why they read out La La Land as ‘Best Picture’ before the cast of La La Land actually had to be the ones to take the microphone and tell Moonlight‘s cast that they’d won. 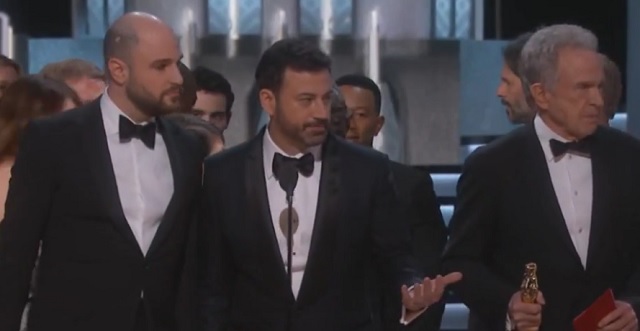 This is a Steve Harvey moment through and through. It’s reminiscent of when Steve totally fucked up the Miss Universe pageant by announcing the wrong winner simply because he read the wrong thing on the card. In this case, the case of The Oscars, it appears as if the envelope was wrong and they didn’t just read the wrong name, but for all intents and purposes they fucked up and this is Steve Harvey’s debacle all over again.

Well, Steve woke up this morning and started tweeting about last night’s affair and he has some advice for Warren Beatty, the actor who was holding the envelope last night:

Good morning everybody! Went to sleep early last night. So… what I miss? #Oscars

Tune in to @SteveHarveyFM at 8 AM ET today for my response to last night's #Oscars . YOU KNOW I have something to say 😂

Call me Warren Beatty. I can help you get through this! #Oscars

Want to see it all unfold in real time? Here’s footage of the exact moment the cast of Moonlight realized they’d won ‘Best Picture’.

If anyone knows how to handle an award show fuck up it’s Steve Harvey, so if I was Warren Beatty I’d 100% be getting in contact with Steve Harvey.

RELATED: The Internet Mocks The Academy Awards With Steve Harvey Memes After Best Picture Screw Up