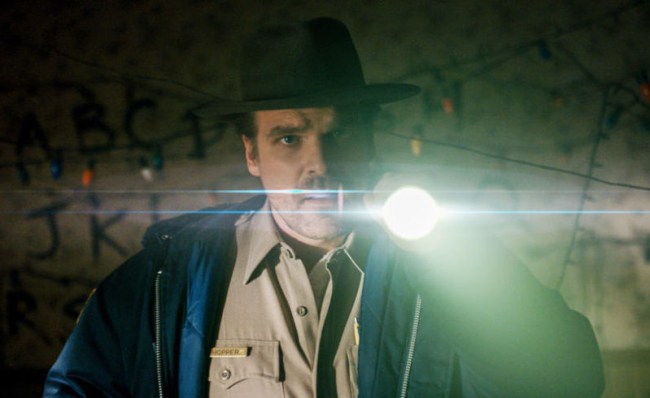 Ever since Stranger Things captivated millions of us over the summer we have been waiting (impatiently) to find out what is going to happen to the kids, Joyce, Chief Hopper and more in season two.

Not to mention the fact that pretty much everyone who watched the show wants to see a little “Justice for Barb.”

We already got a little bit of an idea what Eleven’s fate will be in season two a few months ago, but now we know a little more about the rest of the characters.

That’s because over the weekend some of the cast held a panel on the Fan2Sea Comic Con cruise and the Chief himself, David Harbour, dropped some important tidbits of information on us.

New to the cast in season two will be actors Sean Astin, Paul Reiser, and Linnea Berthelsen and it sounds like Astin’s role will be very interesting, according to Harbour.

“We have Sean Astin… he’s Winona’s new boyfriend, much to the chagrin to the Chief of Police.”

“The question and the feelings that Nancy has that no one ever cares about her friend Barb, are very much present in the beginning of the season.”

Unfortunately, and sorry, that does not mean that she will somehow be coming back to life. Sad.