10 Reasons Why ‘Die Hard’ Is The Greatest Christmas Movie Ever 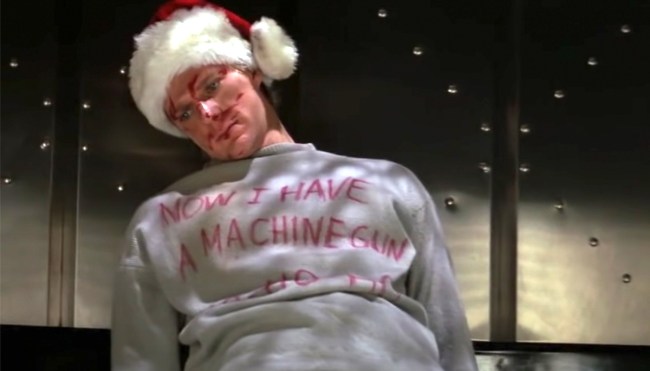 Throughout the history of cinema, there have been some truly phenomenal Christmas movies. I’m talking about films like Elf, The Nightmare Before Christmas, National Lampoon’s Christmas Vacation, It’s A Wonderful Life, and A Christmas Story. Each of these holiday classics are more than worthy of being viewed, preferably near a fireplace, on a yearly basis. Of course there have been some stinkers, too. For instance, there’s Ben Affleck’s Surviving Christmas…and Ben Affleck’s Reindeer Games. Yep, Affleck burned us twice. But let’s focus on the positives here, the good Christmas films, of which there have been many.

For my money, there’s one holiday movie that stands head and shoulders above the rest. No, it’s not Home Alone, though that is a bona fide yuletide classic. It’s not even Miracle on 34th Street. No, if you ask this guy, the greatest Christmas movie of all time is the inaugural film in the Die Hard franchise.

And here, friends, is why…

1. It’s All About Family

The bullets. The bombs. The copious amount of blood. At the end of the day, John McClane braves it all for the love of his family. At the heart of it, this movie is all about a man wanting to reclaim the love of his estranged wife, and his two kids, who are only shown in one crazy quick scene where they’re being watched by Paulina, the Latina maid. But it’s about them too, dammit! Family. That’s what it’s all about. Yippee-ki-yay.

German terrorist Hans Gruber is a far more evil antagonist than The Grinch! There’s not even an argument, really. That furry green creep was just trying to steal Christmas. Gruber, on the other hand, was trying to steal $640 million dollars in bonds, as well as the lives of a large portion of the Nakatomi Company.

The Grinch snatched presents and Christmas trees. Hans Gruber murdered several innocent partygoers, not to mention a large chunk of the Los LAPD. Any great movie, holiday-themed or otherwise, has high stakes. And in Die Hard, Hans Gruber drove those stakes through the roof. You’re a mean one, Mr. Gruber.

3. The Craziest Christmas Party Ever

Stereotypical ‘80s douchebag Ellis is doing rails of cocaine. Most office Christmas parties are NOTHING like this! If anything, save for the cocaine part, the first 10 minutes of Die Hard should serve as a motivational tool for your Christmas party next year. You can do better! We can all do better! Next let’s do it Nakatomi style!

Most Christmas movies feature the holiday season’s customary colors – red and green – in a traditional sense. But not Die Hard, dammit! Oh no. This late ‘80s classic decided to feature a healthy dose of red and green, but they did so, let’s say, less conventionally.

You want red? Well then look no further than Nakatomi exec Joseph Takagi getting his DNA splattered against a wall after being shot in the head by Hans Gruber! Or what about when McClane was laying underneath that table and shot that one Spanish guy in the dick! And if you’re looking for green, that’s what this movie’s all about! Gruber’s entire endgame here is that he’s trying to steal $640 million dollars.

5. It Promotes Giving To The Needy

One major theme in several Christmas movies is giving to the needy, reaching out to those less fortunate during this, the season where many of us decide to go above and beyond to help those less fortunate. Well remember when John McClane fell down the stairs while wrestling with that creepy, blonde-haired, vaguely Scandinavian, bad guy? Yeah, that led to a vaguely Scandinavian death. But it also led to some posthumous holiday giving!

See, during this movie, our favorite New York detective is shoeless. But after the fall, he decided to take the villain’s loafers. That guy no longer needed them. John McClane did. A Christmas miracle! Sadly, they didn’t fit.

While Die Hard is a Christmas movie, it doesn’t feature a traditionally Christmas-centric soundtrack. But that’s fine. It’s quality, not quantity. Aside from ending on “Let It Snow”, the film only features one other Christmas song. After McClane is picked up at LAX, his fast-talking limo driver, Argyle, cranks up one of the most underrated holiday songs of all time. Of course I’m talking about Run-DMC’s “Christmas in Hollis”! That Argyle is a good egg, I’d follow him on Spotify.

He not only succinctly told John McClane the ingredients of a Twinkie, but he also saved the day at the end! RVJ deserved more recognition! Perhaps he’ll retroactively be honored at this year’s show.

Yeah, back to that big dead blonde guy for a hot minute. After he went belly up, John McClane decided to turn his corpse into a fun little yuletide surprise! In order to let Hans Gruber and company know that he was coming for them – and that he was now armed to the teeth – McClane tied this freshly dead body to a chair and then sent it down to the party via an elevator.

But, because McClane is as witty as he is heroic, he decided to go on step further and write a message on the dead guy’s shirt. It read, “Now I have a machine gun. Ho Ho Ho”.

9. Chimneys Are For Pansies

Sure, in some classic Christmas films, Santa Claus – or someone in a Santa suit – may make their way down a suburban chimney in order to bring good tidings and holiday cheer. But in Die Hard, John McClane takes that general notion and turns it on its ass.

Any a-hole with a fake white beard can climb down a chimney, but it takes a real man to circumvent gun-toting super villains and climb down an elevator shaft, which is exactly what Bruce Willis’ character did! What I’m saying here is that John McClane has a far bigger sack than Santa.

Much like with the tale of Ebenezer Scrooge – which was told brilliantly in another fantastic Christmas movie, Bill Murray’s Scrooged – Die Hard features a crystal clear story arc for it’s lovable protagonist. After the proverbial doo doo has hit the fan, a bleeding from the feet John McClane relays a message to his wife, Holly, via Sgt. Al Powell, his new buddy on the outside. John admits that while he was a bit of a son of a bitch in the past, he now sees the error of his ways. This entire insane dilemma made John McClane a better man.