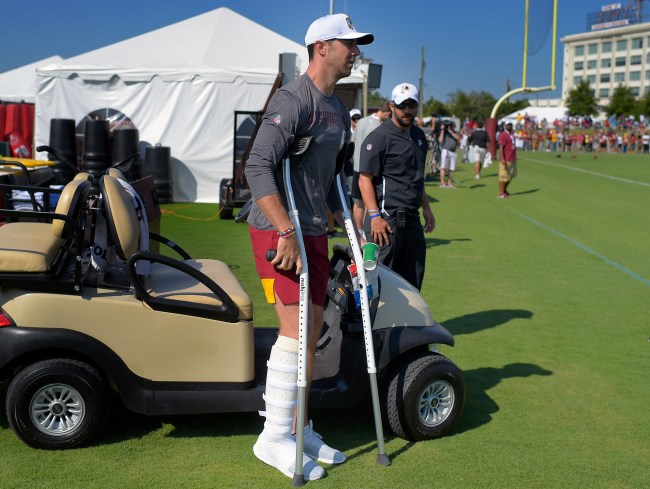 If you happened to see the horrifying photo that emerged this week of Alex Smith’s leg four days after snapping it in a game versus the Houston Texans 17 months ago, I feel for you. I did not eat dinner either.

The photo was released in the lead-up to the E:60 documentary, Project 11, premiering on Friday.

The doc will detail the 35-year-old’s ongoing recovery after an injury that required 17 surgeries and kept the quarterback in the hospital for a month with a post-operative, life-threatening infection of the blood.

ESPN released a clip below from September 2019 in which the former number 1 draft pick calmly describes how doctors, who deemed his injury ‘warlike,’ had to surgically remove a piece of his quad into his shin to prevent amputation.

When @Redskins QB Alex Smith broke his leg in 2018, no one thought it would take 17 surgeries to fix. Here’s a look at #Project11 pic.twitter.com/lwcj1l0fV6

Andy Tennant, E60 executive producer, was granted a front row seat to Smith’s recovery and voiced his amazement with the quarterback’s approach to a tragic situation.

“No NFL player has ever been through what Alex Smith has,” said Tennant. “He’s normally a very private person but he wanted to document his road to recovery as well and as detailed as possible, with the hope that future players could use it as a road map.

“The access that he and his family granted to E60 is incredible and viewers will see a story of strength, dedication and perseverance.”