Bodybuilder Tries Eating And Training Like Usain Bolt For A Day: ‘My Legs Are In Bits’ 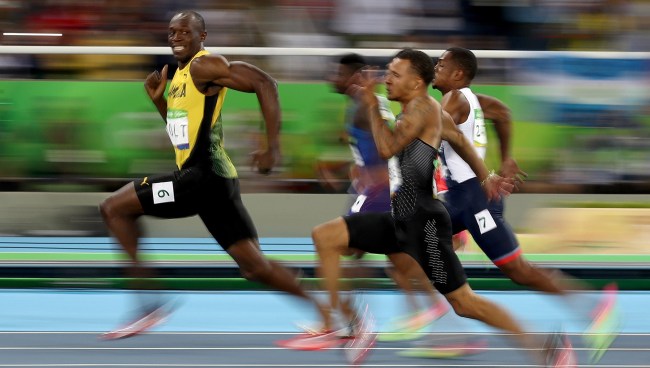 British bodybuilder slash YouTuber Gabriel Sey often sets the bar very high with his training regimen in an effort to help out his over 406,000 followers.

However, sometimes, as those who follow him know, he bites off a little bit more than he can chew.

Speaking of chewing, recently Sey decided to try and eat and train like the fastest man on the planet, 8-time Olympic gold medalist sprinter Usain Bolt.

If that sounds insane, well… Sey is no stranger to doing insane things.

To begin the day, Sey had to do an ab workout and several plyometric exercises, including side planks, reverse crunches, leg raises, and box jumps.

That’s all before breakfast, which consists of a fried egg sandwich on white bread.

With that segment of training completed, Sey goes to the track for a series of running drills, including working with the starting blocks, as well as training for acceleration, top-end speed, deceleration, and speed endurance.

“FYI, I have no idea how to do a proper sprint start. I’m making this up,” jokes Sey, who won’t be laughing much longer.

After several drills, Sey admits, “my shins are killing me,” and that “the 100 has made me feel rubbish.”

Now it’s time to eat again, which in this case consists of chicken breast, brown rice, and vegetables, followed up with the use of a massage gun to keep his hamstrings from exploding.

How he’s still standing at this point is a mystery.

Finally, he settles down for a dinner of steak, rice and peas, plantains and dumplings.

At the end of it all, Sey imparts a very important bit of wisdom when he tells his viewers to never “underestimate what these people go through.”

Watch the video below and, trust me, you never, ever will.