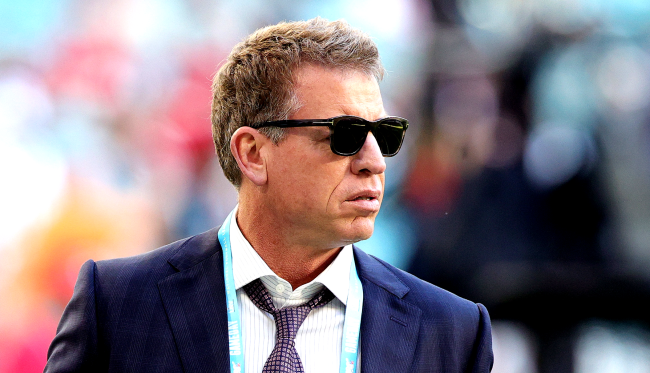 Over the weekend, Troy Aikman posted a shirtless photo to Instagram (alongside a shirtless Jimmy Johnson) and the internet is stunned at how shredded the former NFL quarterback looks at age 54.

Considering it has been over 20 years since he suited up for the Dallas Cowboys, Aikman’s toned physique is pretty incredible.

“What a weekend! Lots of laughs with great friends reminiscing our time together in Dallas and celebrating @jimmyjohnson4616. We are all indebted to Coach for changing our lives. Next stop, Canton, Ohio!” Aikman wrote on Instagram.

This isn’t the first time Aikman has wowed the internet with just how well he’s kept in shape. Back in 2017 when he was 50, Aikman shared some photos of himself and his then-girlfriend, now-wife Capa Mooty on a beach during a trip to the Caribbean.

Dude looked he could still suit up for Dallas back then as well.

So how does he do it? Seriously, how?

According to a January 2021 article in GQ, Aikman has been using his time since the pandemic hit to get, as he put it, in the best shape of his life.

“When you say you’re in the best shape of your life, usually what that means is that you’re old,” Aikman said with a chuckle. “You don’t hear 20-year-olds saying, ‘I’m in the best shape of my life!’ But I feel really good. I think it’s as healthy as I’ve ever been, physically, mentally and emotionally.”

Aikman says that he has always been pretty strict about working out, even in retirement.

“I’ve gotten really strict since the quarantining started last March,” said Aikman. “I felt that people were going to go one of two ways: they were going to be in the best shape of their life or they’re gonna be in the worst shape of their life. I decided that I was gonna be in the best shape of my life. So I’ve just tried to take it to a little bit of a different level for me. I’m eating a lot more fruits and vegetables, whole foods, and a lot of fish and lean meats.”

Aikman added that he’s cut out all sweets since last March and has been drinking celery juice every morning, saying he has “really noticed a huge difference” in how he feels.

What a typical day of eating and a week of working out?

I do the juice in the morning. At lunch, turkey chili is my general go-to. And then in the evenings, I’ll have a big dinner relatively early. Usually around 5:00. That’s when I eat a lot of vegetables: broccoli, sweet potatoes, Brussels sprouts, asparagus. And fish, things like that.

For my workouts, I lift four days a week. As for cardio, I’m 54 now and I feel like I may have been overtrained in the past. I’m trying to take more days off. It used to be, in a year—365 days—I would maybe take five days off from cardio. Then I started taking Sundays off during the football season before broadcasting games. I would just use that as a day of rest. I found it to be helpful. Now, I’m mixing in more days off and not beating myself up so much mentally when I do it. I’ve just read more and more about how you need to give your body a break, and rest is important.

I still go hard on the cardio but now I try a couple days a week of active rest. A four- or five-mile walk. I got into yoga the offseason before the 2019 season. I’m not good at stretching. I’m tight. And then I do all this training. So I got into that and I loved it. As good as it was for my body, it was even better for my mind.

I’ve been meditating for probably seven or eight years now, and been on a few retreats. I got away from it for a couple years but during the quarantine, I rededicated myself to that. Now I’m back doing that every morning. All those things combined just really helped me, as far as just being in a good place and feeling good.