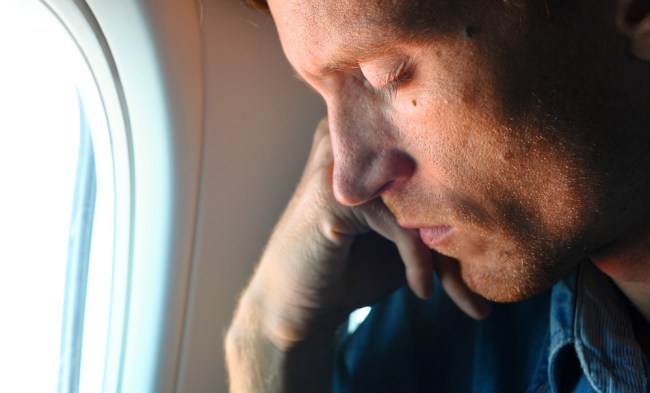 As if finding out this week that being one of the first to board an airplane makes you more susceptible to getting sick, now we have yet another thing to worry about when we’re flying.

According to pharmacist Angela Chalmers, who spoke to Express about the topic of flying…

“A quick change in altitude affects the air pressure in the ear. This leads to a vacuum in the Eustachian tubes which makes the ears feel blocked and sound dull.”

“Try not to sleep during take-off and descent as you will not be swallowing as frequently and this can lead to blocked ears.”

Health website MedlinePlus concurs with Chalmers, stating, “Sleeping during takeoff or landing can create problems with passengers ears. This is because the air pressure changes that happen when the plane is increasing or decreasing in height rapidly. Passengers are normally advised to swallow, drink water or chew gum during this to stop ears popping. If they’re asleep, they won’t be able to do this.”

So when a airline passenger falls asleep and does not do anything to pop their ears the pressure change can cause anything from dizziness to ear infections to eardrum damage, and potentially even nosebleeds and severe hearing loss.

It’s much safer to only try to catch a few zzz’s while the plane is firmly in the air and maybe chew a little gum to help get those ears to popping.

Oh yeah, also don’t forget to turn on that air conditioning vent above you when you sit down in your seat. Don’t throw coins into the jet’s engines for “good luck.” And don’t ever sit next to NBA Lothario Chandler Parsons on a plane.