2022 Audi A3 Review: A Slick and Stylish Sedan for the City and Beyond 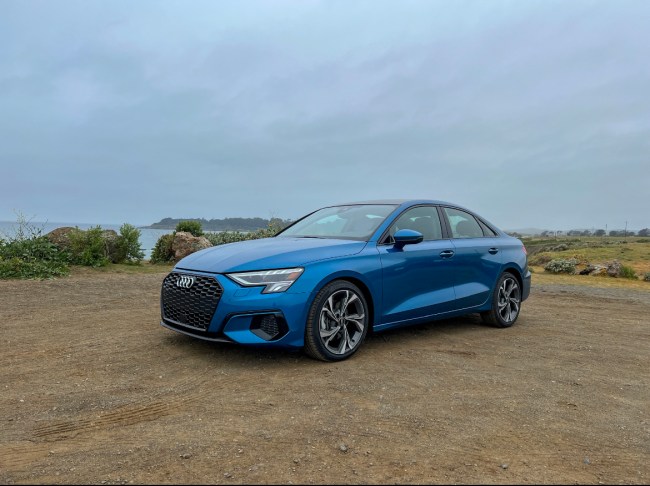 Before we even hit the open road, I already fell for the 2022 Audi A3.

It was late on Wednesday, the night before our weekly street sweeping day, and everyone in the neighborhood was out looking for a parking spot that would be safe from tickets and tow trucks.

Real estate is limited in these parts and there’s an overabundance of vehicles per capita, so finding parking is much more complicated and difficult than anyone who doesn’t live in a major city might imagine. Neighbors intentionally park across two spaces to save one for their spouse, while others leave garbage cans in front of the curb to claim turf. It’s a total scene.

Meandering around the neighborhood, keeping a vigilant gaze for any free spot, I drove in circles, expanding my radius with each subsequent rotation. Things were looking grim, helpless even. And then I saw a beacon.

Just down the block, there was a glimmer of hope: some exposed curb in front of an empty house that’s been listed for way too long in this market.

Perhaps it was a mirage, an illusion of sorts, but as I inched closer, I began to understand why no one was parked there. In a neighborhood where pickup trucks and tricked out SUVs are dominant, no one would even attempt to squish into such a cozy spot.

But not me. Well, not me and the Audi A3 40 TFSI Quattro. We slid right in there with ease, instantly forming a long-lasting, unbreakable bond. 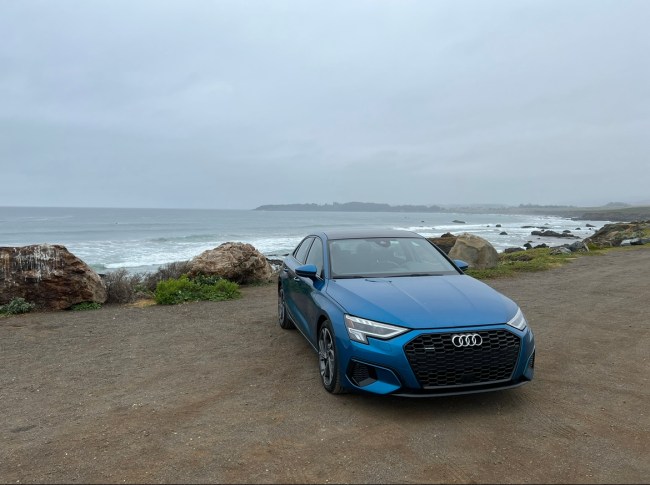 Having found a spot that no full size sedan, SUV, crossover, or pickup truck could ever fit into, and safe from the local parking enforcement and their fines, I awoke early the next morning for this test drive: a 600-mile round trip jaunt from Los Angeles to California’s Central Coast.

Time to fire up the keyless ignition …

Already smitten with the A3’s compact exterior, it was on the road – in traffic on Route 101 near Burbank – where I had a major revelation. This car doesn’t feel so small on the inside. In fact, the cabin space felt ample for my 5’11” frame. No issues with leg and headroom made traffic much easier to deal with, comfortable even, and provided plenty of time to get the mix just right on Audi’s MMI 10.1” touchscreen display, complete with Apple CarPlay.

Now, folks who have yet to upgrade their devices to the latest technology will need to keep in mind that the 2022 A3 is outfitted with USB-C charge ports. This was the first time I’ve seen this in a vehicle, and was an immediate reminder that Audi is constantly keeping their models up to date and compatible with the latest tech. It was also another reminder that the future is now, and that technology is constantly upgrading. But even without the proper cables, drivers can at least connect to the MMI via Bluetooth. 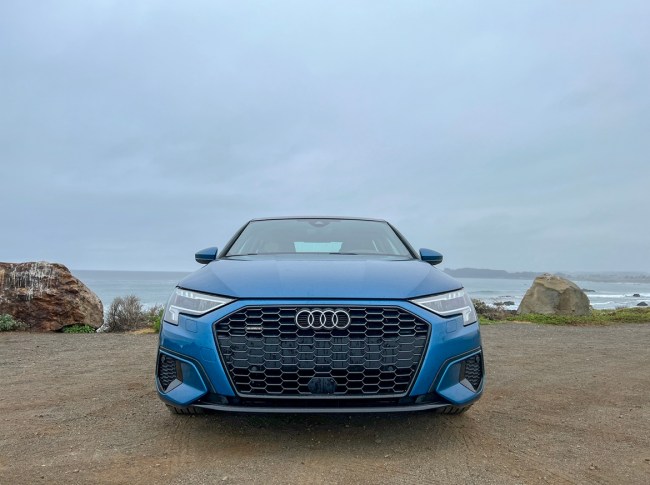 THE LITTLE ENGINE THAT COULD

With the tunes now bumping, traffic eventually dissipated as I passed Santa Barbara. Finally, the time had come to feel every bit of the Audi A3’s 201 horsepower and 221 lb-ft torque.

Flooring the accelerator, the engine’s responsiveness was instantly noticeable as the A3 shifted through all seven gears of its S tronic transmission with quattro all-wheel drive to reach a top speed of 109 mph. The speed actually wasn’t the surprise here – according to manufacturer specs, the 2022 A3 goes from 0-60 mph in 6.3 seconds – but rather the smoothness of the ride. Even in triple digits the Audi A3 handles like a dream, gliding, almost hovering, above the pavement.

Impressed by the engine and the feel of the A3’s low profile, I decided to take a break in Morro Bay for a plate of fish and chips along the waterfront. Giovanni’s Fish Market is a regular stop when cruising up Highway One, and while I was scarfing down a plate of fresh catch and chowder, I witnessed more than a few passersby commenting on the Audi A3 40 TFSI Quattro. Nearly all the remarks were in regards to the A3’s sharp and stylish Atoll Blue color and finish.

Never one to put too much importance in car colors, I must admit that the A3’s Atoll Blue paint job looks expensive. It’s slick and stylish, sexy even, and while this is Audi’s most basic starter model, it looks just as sharp and distinguished as any luxury car on the market. Seriously, it’s a bit strange to put so much stock in a car’s color, but between the Atoll Blue and the District Green Metallic SQ5 I road tested last year, it’s clear that Audi has dialed in some extraordinary hues and tones to ensure their cars look unique, distinct, and downright classy.

Beyond the color, the A3 earns added style points on account of the bi-color finish on the 18” 5 Y-spoke design wheels, along with the high-gloss black exterior elements. The interior is just as impressive, with all the bells and whistles: heated leather seats, Audi sound system, panoramic sunroof, platinum gray inlays, and three-zone automatic climate control. The Audi A3 offers luxurious touches that are comparable to many higher priced sedans.

A post shared by Driving To The Edge (@drivingtotheedge)

Sold on the A3’s speed and power, and smitten with the car’s interior and exterior, I continue with this test drive, moving on to the steep climbs and sharp descents along the Pacific Coast Highway. Again, I’m testing the vehicle’s responsiveness, and the Audi A3 has no trouble with the rolling switchbacks of America’s western shore, seamlessly alternating between every acceleration and each impending press of the brake as we near the next turn. It’s basically like a slalom race, albeit on a cliffside road that drops off into the Pacific Ocean.

FUEL ECONOMY AT THE GAS PUMP

Finishing up the first half of this test drive, it’s on to the gas station, where fuel economy is taking on a whole new meaning in 2022. And this is one of the A3’s greatest selling points: 36 miles per gallon on the highway!

This type of fuel efficiency isn’t exactly rare for a vehicle this size, but it is an outlier in the luxury sector, where bigger engines often guzzle far more gas. Twenty-eight miles per gallon in the city is nothing to scoff at either, especially when people are regularly forking over more than 6-dollars per gallon these days.

For the entire test drive (which does include a complimentary tank of gas), I spent roughly $60 to drive more than 600 miles. Only a hybrid or fully electric car can best this stat, which is certainly of increasing importance as oil prices have plateaued at an all-time high. 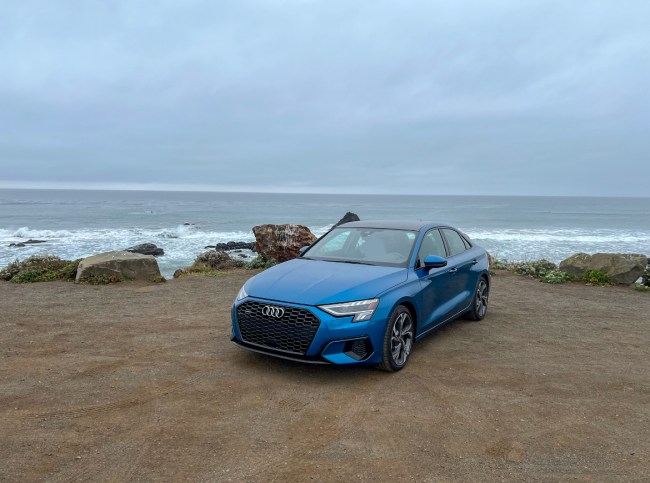 Back in Los Angeles after a few days on the Central Coast, it’s time to return the A3 back to Audi, but it was not without trying to extend the auto loan for a few more days. Unfortunately, Audi had other plans for the vehicle, so I was unable to continue this joyride. But what a joy it was. And, for under $43,000, the Audi A3 40 TFSI quattro is a steal in the luxury sector. It’s a fancy piece of engineering that is still accessible to consumers looking to move up market.