#Cars
BroBible may earn a commission if you buy a product or service via links in this article.
by Dan ShapiroOctober 15, 2020 1:50 pm 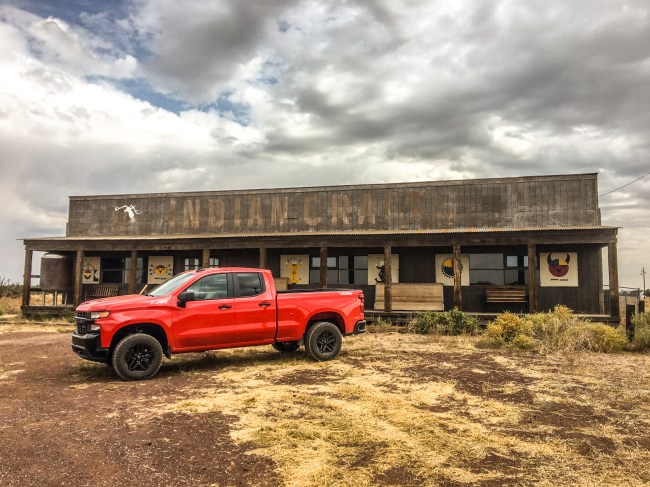 There’s a mighty feeling when you’re driving the biggest, baddest truck on the highway. Steamrolling down the road, none of the other cars matter. In fact, they don’t even exist because in the Chevy Silverado Custom Trail Boss, I’m the king of the road.

Big rides are meant for big drives, and on this occasion it’s 490 miles from Los Angeles to the south rim of the Grand Canyon. There literally is no vehicle better suited for this massive road trip than the Silverado Custom Trail Boss, and I’m determined to push this beast to its uppermost limits and furthest reaches.

Departing LA at 7 a.m., it’s straight on to I-10 west, where the Trail Boss easily dwarfs every other car and pickup out there. Sitting high above the line of sight of everyone else on this early commute, I take it easy on the V8 6.2-liter engine until I reach the Cajon Pass on I-15 north. 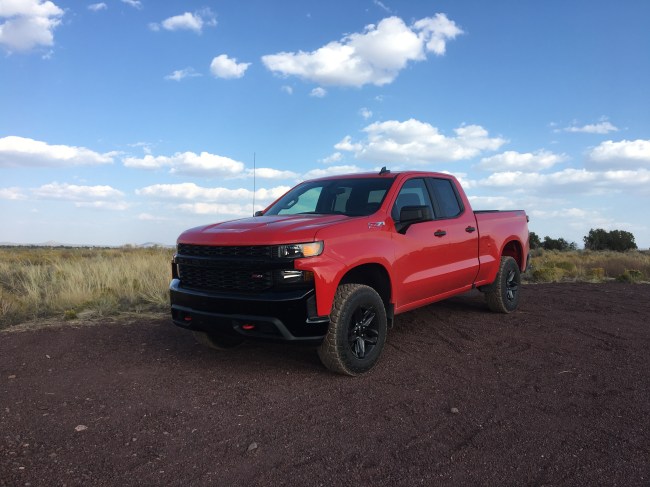 Presented with the challenge of climbing 3,800 feet, I immediately crank down on the accelerator, giving the Trail Boss the juice she desires. It’s an easy scale up into the high desert, and just an hour into this trip, I can already feel the power and force of this magnificent machine.

Now at Barstow, I head east on I-40 for the bulk of this trip, which parallels the famous Route 66. No doubt this is the same desolate desert terrain that so many Okies traveled during the Great Depression. The historical reference is almost an ironic metaphor, as I go against the migratory grain in search of new land and lush territory. The Silverado Trail Boss is the perfect companion, as its stripped down, no frills interior and rugged-yet-flashy-red exterior keep the focus on what’s most important: The drive.

The 320 miles between Barstow, CA and Williams, AZ make up the bulk of this journey. It’s a seemingly endless stretch of road that connects the two states by barren desert. Fortunately, the Apple CarPlay and in-car WiFi come in handy, providing hours of road trip entertainment. 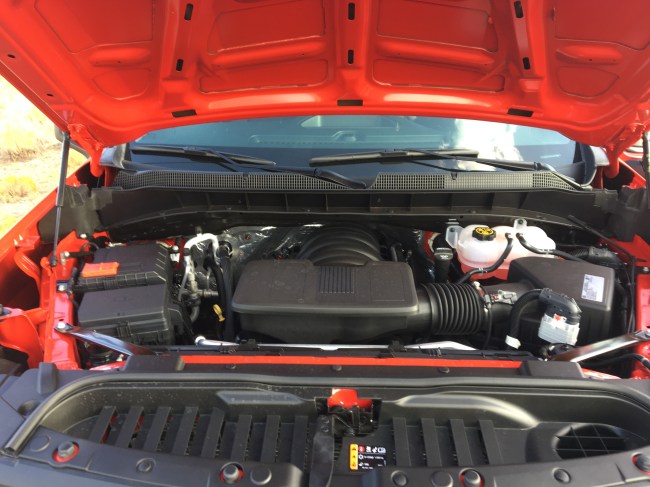 With the playlist booming and the sun beating down — the thermometer reads 107-degrees outside, but the internal cabin temperature is a balmy 72 — it’s a hard charge through the Mojave National Preserve.

Long before I reach the Arizona state line, it becomes apparent that someone has installed a governor on the engine. Perhaps it’s for the best, since there are plenty of police out today, but the Silverado Trail Boss tops out at 97 mph. No worries. I’m still making great time.

Deep in Arizona, the highway begins to elevate into the 2,600-ft. range. Again, the Trail Boss obliges my command, easily scaling every single stretch of highway. 460 pound-feet torque makes the climb a simple task, and before I know it, we’re nearing Grand Canyon National Park. Fortunately, I purchased a yearlong pass to all the American national parks just a few weeks ago, so I’m waved in like a seasoned veteran by the park ranger, who appears impressed by the truck’s extra lift and 18-inch high gloss black aluminum wheels.

The Chevy Silverado Trail Boss is quite a looker, and if it wasn’t for the plentiful elk, the occasional big-horned sheep, and the absolutely breathtaking Grand Canyon itself, this truck may just be the most noticeable attraction in the entire park. However, man made objects just can’t quite compete with nature, or at least nature of this magnitude. 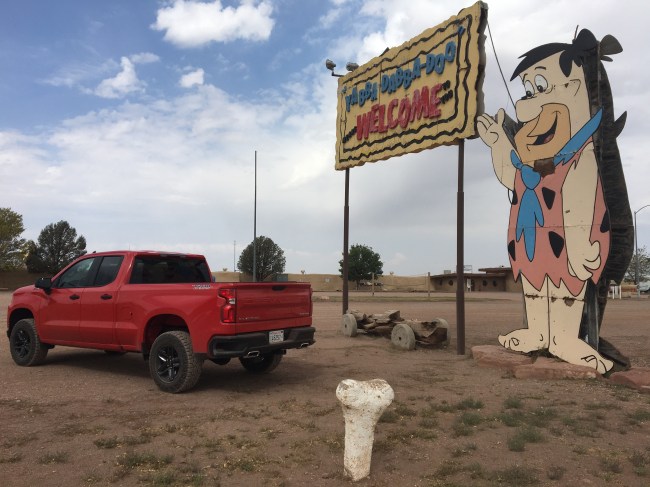 Spending a few hours at the Grand Canyon, snapping off photo after photo, I’m completely mesmerized by the sheer size and grandiosity of the gorge. Having already traveled to 46 states, it’s rare that I encounter an American beauty that takes me by surprise, but there’s no doubt that the Grand Canyon is in a league of its own.

Now back on the road, it’s a short 31 miles to my lodging spot for the night, the Under Canvas resort, where tents are already set up, and come complete with beds, showers, porches, and in my case a stargazing window to look at the plentiful constellations and the Milky Way while drifting into a soft slumber.

Arriving just in time to roast a few s’mores, the day closes with a picturesque sunset over the Arizona plain.

Driving over 500 miles in a day is never an easy feat. It takes endurance, persistence, and plenty of gas. But on this day, in the Chevy Silverado Custom Trail Boss, it’s a treat and a pleasure. Not only have I witnessed intense natural beauty, but I’ve felt the rush and power of driving the biggest, baddest street legal vehicle in existence.

After this, I’m not sure how anything else will ever compare. 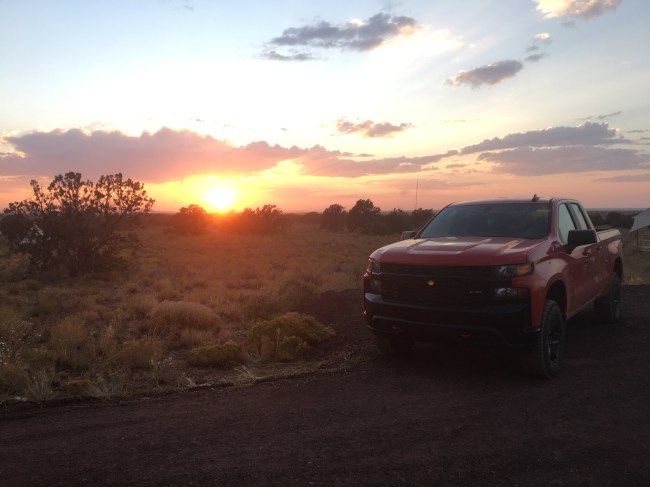 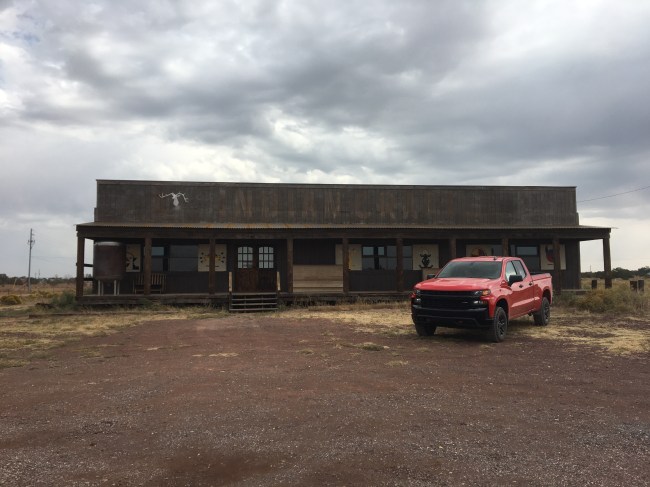