2020 Corvette Stingray Coupe Review: The Thrill of a Lifetime on Four Wheels

#Cars
BroBible may earn a commission if you buy a product or service via links in this article.
by Dan ShapiroOctober 15, 2020 2:37 pm 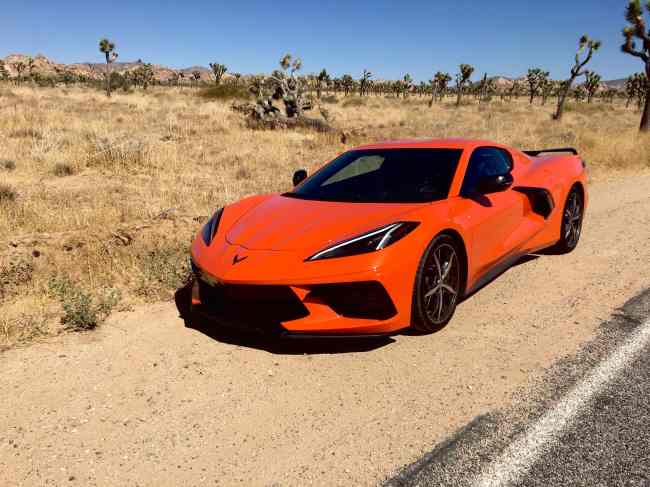 This thrill of a lifetime didn’t come without some sacrifice. I burned my hands during this 300-mile venture into the desert, sun beating down on my mitts through the windshield. My lower back took a bit of a hit too, but that could just be aging or the thrust of hitting top speeds in the 2020 Corvette Stingray coupe.

Either way, it was all totally worth it …

Departing Los Angeles right around noon, all eyes are on the Corvette Stingray everywhere we drive. Not only is the Sebring Orange an ode to the speed and straight fire of this flashy coupe, but the mid engine design — you know, where the engine sits behind the seats — turns heads on every street, highway, and desert road. It’s undoubtedly one of the coolest features of the Stingray, a total showstopper in fact.

To be honest, I’ve never driven a car so compact and low to the ground, so there’s a bit of a learning curve for the first few miles. Learning to trust the vehicle as much as my own senses, I quickly adapt to the rearview camera and moving side view mirrors, which tilt down when the Stingray goes in reverse.

But this drive is all about forward motion, and after meandering the streets of downtown Los Angeles, it’s straight to I-10 west, heading toward Joshua Tree National Park, the destination of this speedy jaunt.

Early on in the drive, traffic is so dense that I don’t have a chance to open up the 6.2 liter V8 engine, but just outside Covina, the road clears, and I instantly gun it, hitting that 60 mph mark (and then some) in less than three seconds. 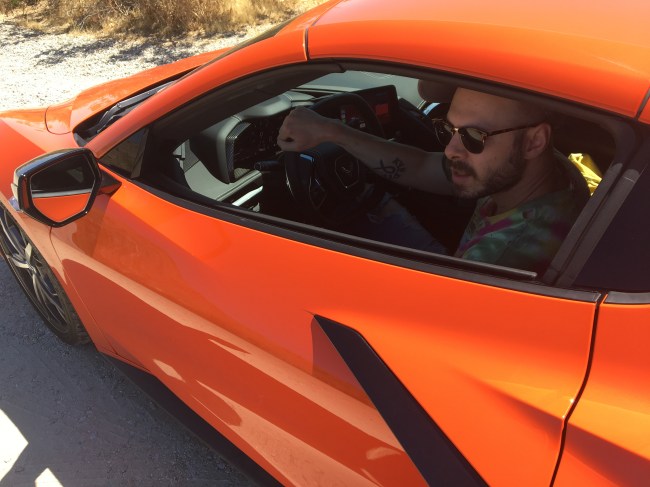 See, the 2020 Corvette Stingray coupe isn’t just about speed and grace. It’s also about responsiveness. Whenever I want this car to fly, it flies. And when I need it to slow a bit, it obliges my every command.

Now on Route 62, heading into the Yucca Valley, I push the engine just a little bit more to feel the intensity of the 495 horsepower and the 470 pound feet torque. This is an exceptional machine, unlike any vehicle I’ve ever commanded, and with the power and speed comes immense control of the road. There’s never a moment where I feel like the car is driving me. I’m always at the helm, and having quite a bit of fun pushing the limits of the Corvette Stingray, well into the triple-digit range.

Taking a moment to gas up before entering Joshua Tree National Park, I’m faced with my first conundrum on this drive. Sitting in the car at the pump, I can’t quite figure out how to open the door from the inside.

With no handle on the door to pull, I search around the cabin, but nothing quite stands out. There’s a brief moment of panic and disbelief, but feeling around the floor, I see a lever — with so many hidden bells and whistles in this sportscar why not go for it?

I decide to give the lever a pull, and fortunately it opens up the driver side door. Immediately afterward, my companion points to a push button on the door. Apparently that also does the trick. 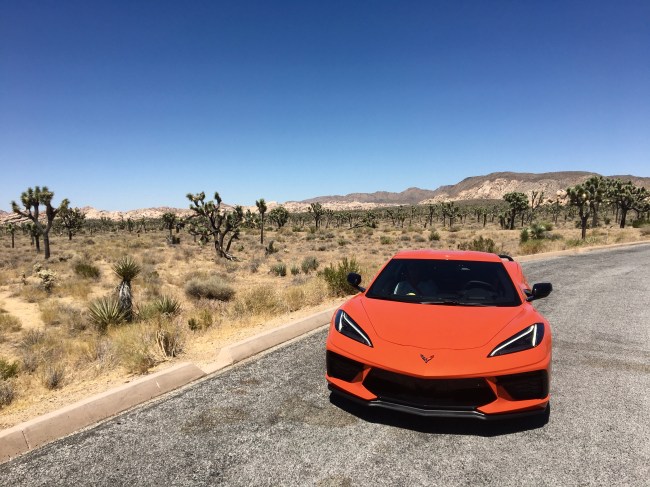 Gassing up, with premium fuel of course, the 2020 Corvette Stingray coupe attracts plenty of hoots and hollers at the local station. A biker, who clearly knows far more about automotive details than I do, immediately strikes up conversation, inquiring about the mid engine. Compelled to concede to his expertise, I’m humbled by both the Stingray and this kind stranger, taking a few minutes to learn more about a car that I’ve been driving for 2.5 hours, speeding through Southern California.

Back on the road, I prepare to enter the gates of Joshua Tree National Park. The ranger at the entrance compliments me on the Stingray, as most everyone I come in contact does, and I follow up by purchasing a yearlong pass that covers visits to every national park. The pass will come in handy in a few weeks (more on that another time), but for now it’s full force into Joshua Tree, where nothing is quite as it seems.

The Corvette Stingray intrinsically knows how to navigate Joshua Tree. Cruising through the desert plain, it whips and steers around the park smoothly, and with ease. And, as is my tradition, it’s straight to the Cholla Cactus Garden, one of the more popular exhibits in the park.

On this particular day, the thermometer on the Apple CarPlay touchscreen dash reads 105-degrees, so rather than spend too much time walking around the garden, I grip the rectangular steering wheel tightly and speed off to Jumbo Rocks and Skull Rock for a little more fun in the park. 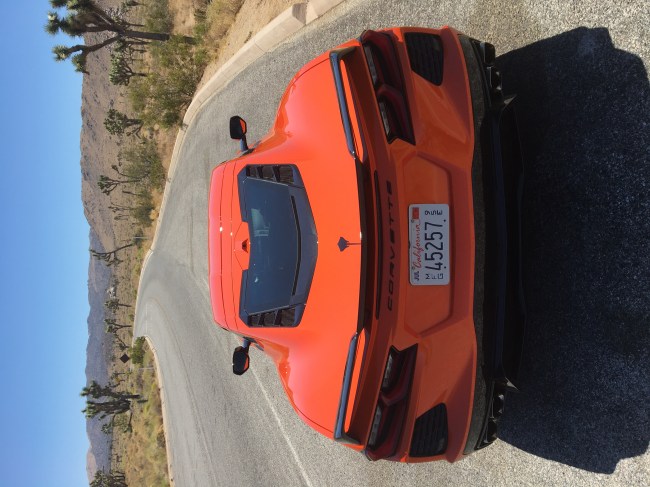 Weaving and winding along the desert road, I finally come to the conclusion that driving the 2020 Corvette Stingray coupe offers that video game feel, where I’m behind the wheel of an luxurious sports car, cruising through an exotic locale that I’d see back in the 1980s at the neighborhood arcade playing Cruisi’n USA. In fact, that’s exactly what this entire trip has been like.

And much like those early arcade experiences, where the high of driving would be met with the eventual low of a lack quarters to pop in the machine, I experience a new, and equally painful low at the end of this trip, when I realize that my hands, exposed in the extreme heat and powerful sun, have been taking direct damage all day while clinching the wheel and ripping around Joshua Tree.

Rubbing aloe vera on my paws, along with some hemp moisturizer, I’m definitely feeling the pain, but thinking back to the hours behind the wheel of the 2020 Corvette Stingray, I decide that the injury was easily worth the thrill. Easily. 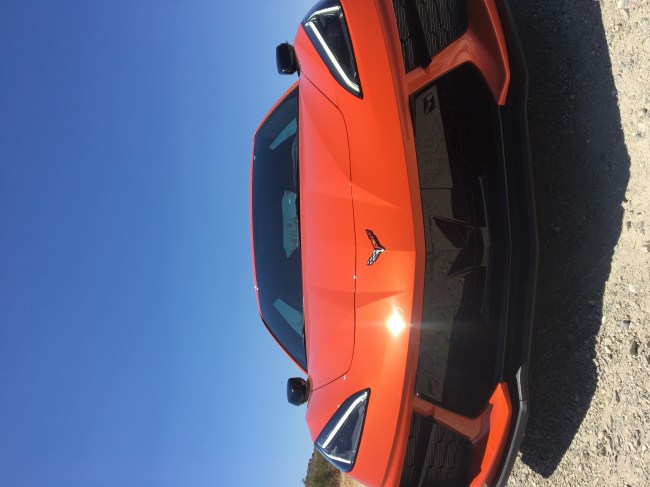