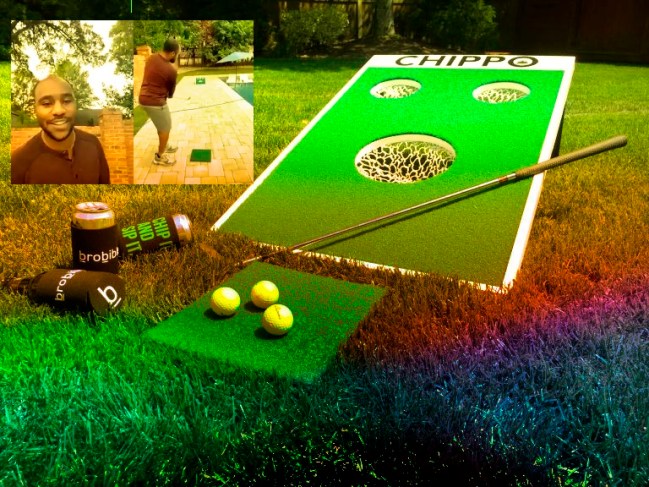 Presented in partnership with ChippoGolf…

We’re in the middle of backyard games season, more specifically backyard drinking games season, and if you’re like myself and many others, you’re always looking for a new game to add to the rotation for the Summer.

You can never have too many backyard games that come with a built-in excuse to crack open a few cold ones with the fellas, but after one round of Chippo in the backyard you’re probably never lugging out those heavy cornhole boards ever again, let’s just put it that way.

ChippoGolf is a sponsor of BroBible’s golf podcast Rippin’ It, which is hosted by PGA Tour player Harold Varner III and Golf Channel host George Savaricas. HV3 and Savaricas recently linked up to play a Chippo game together as part of the Chippo Challenge, and if two guys that live, breathe, and sleep the game of golf can have this much fun playing a backyard golf game in their spare time, it’s safe to say you and your friends will too.

Varner III played the game the proper way, poolside with a cold drink in his hand. Savaricas took a different approach playing inside his living room, which shows that you can quite literally set this game up anywhere and have a great time.

How about the fact that Varner III – a man that’s earned over $7.5 million in his career on the PGA Tour – missed the board a few times? That’s a great example of why this game will quite literally never get dull, it’s not as easy as just tossing a beanbag at a board.

Each Chippo comes with two turf-covered, netted target boards, two turf and rubber chipping mats, and six high-density foam balls. All you need is a wedge and literally any piece of the Earth to play on.

So, go grab a Chippo, a few cold ones, invite the boys over and let the trash-talking begin with the next great backyard game.