From Quirky Steampunk To Classic Elegance: 15 Of The Best Pocket Watches You Can Buy Today

#Affiliate Partner
BroBible may earn a commission if you buy a product or service via links in this article.
by Neil BulsonMarch 13, 2018
Facebook Twitter Reddit Flipboard 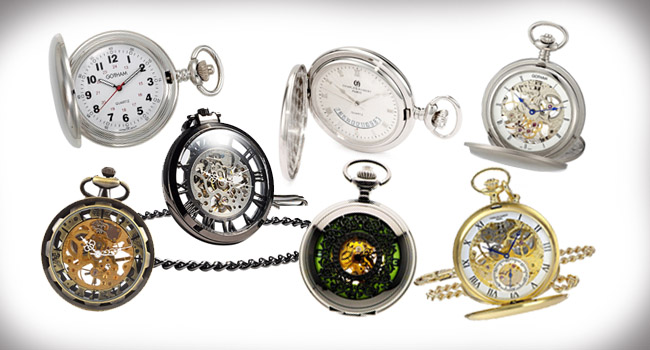 A stylish pocket watch marks you as a man of quality. Or at least one who can, ahem, tell you the time. The best pocket watches make a personal statement about you. They are an extension of your style, of your personality, so you need a good one because, well, you’re a good dude, aren’t you?

So, whatever you need that fits you – and your wallet – we’ve got you covered, with some of the most stylish, best pocket watches you can buy today. 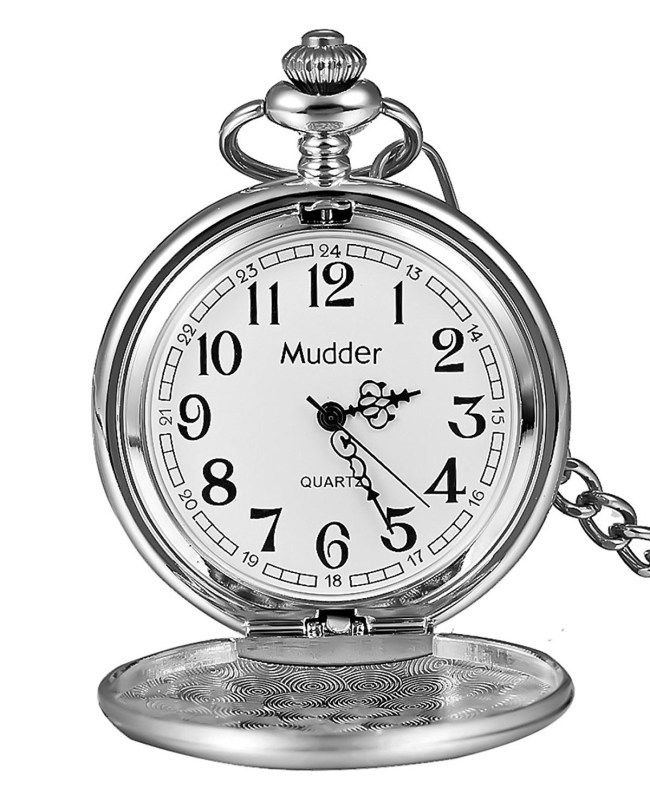 This is just your classic, elegant look. There’s nothing fancy here, no steampunk bells and whistles, just a solid Japanese quartz watch for that solid Japanese quartz dude. Or at least the solid dude part. It’s inexpensive and if you just want something that looks classy and elegant you can’t go wrong here. 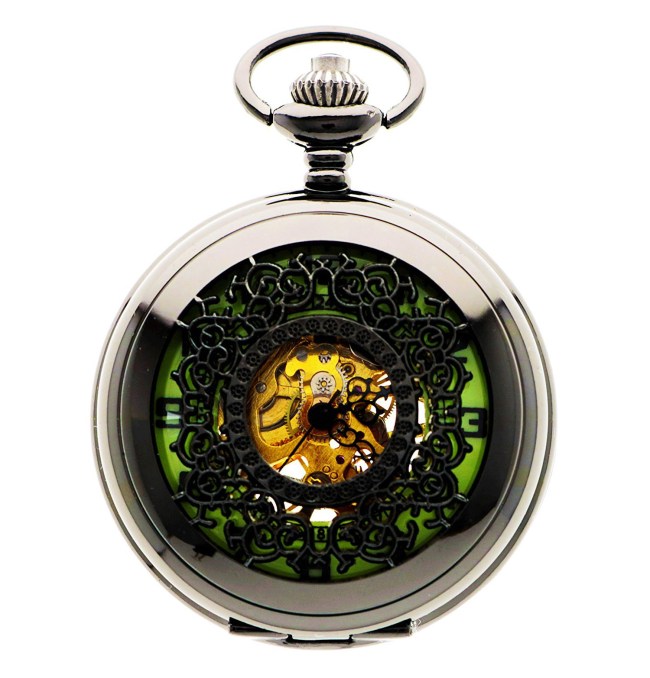 A lot of pocket watches – probably the majority, actually – are steampunk influenced. That’s because, well, because pocket watches are steampunk as hell. This one is beautiful, with a skeleton design over a luminous face. It has that antique look while still hinting at something futuristic. That’s the essence of steampunk, is it not? 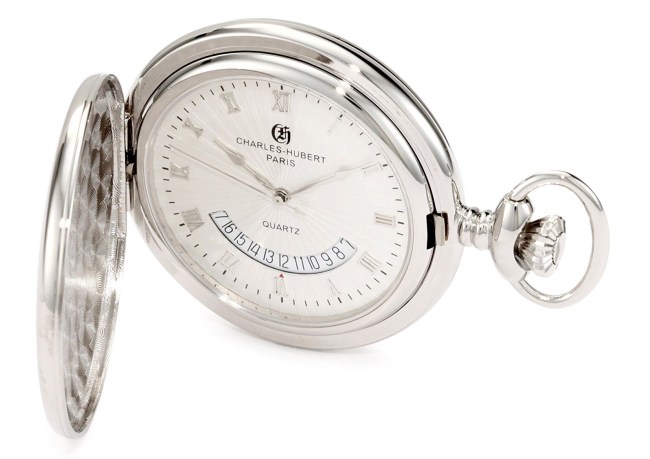 This watch kicks things up a notch with a classic, elegant Parisian influenced look that’s a little slimmer than other pocket watches, which means that you won’t have a huge bulge in your pocket. Er, I mean another huge bulge in your pocket. It’s a little more expensive than some other watches on this list, but not so expensive that it feels like a massive commitment. 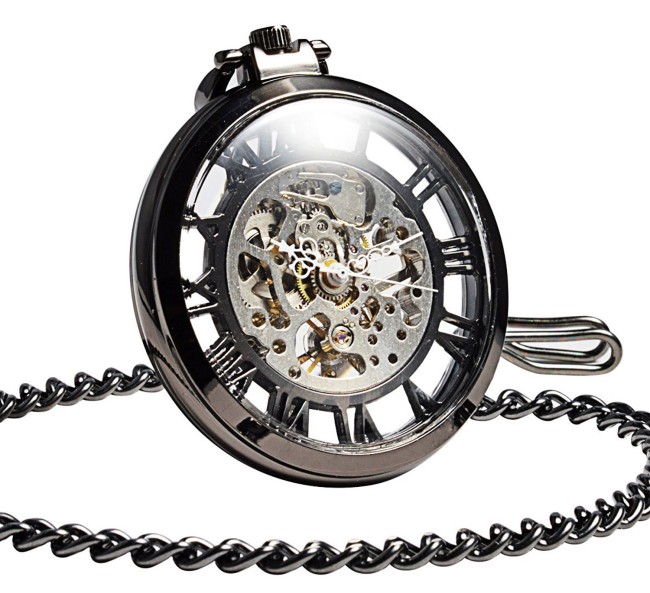 Another steampunk design, this pocket watch has a cool, open skeleton look. Basically, that just means you get to see all the gears and watch guts that make the thing actually, you know, work. But really, it’s all about the look here. It’s steampunk, but not too steampunk if that makes sense. It doesn’t? Well, it’s a cool-looking watch. There. Now buy it. 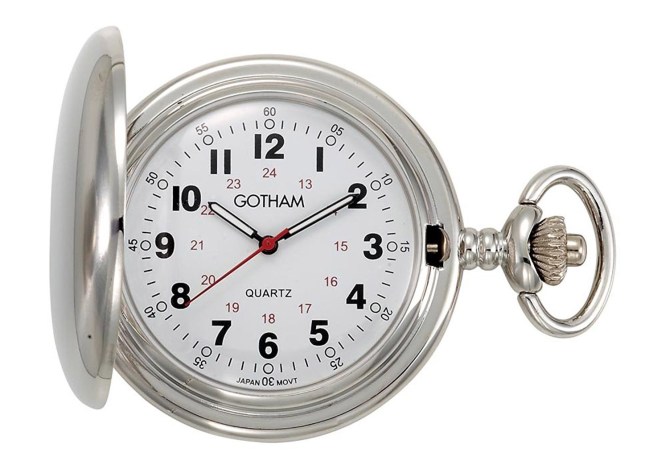 Classic, minimalist, this quartz watch gives you that modern look while just hinting at the nostalgia of the near past. The silver-polished tone and business-like face are perfect for that bro who’s quietly confident, elegant and always in control.

Music Pocket Watch Prop from For A Few Dollars More 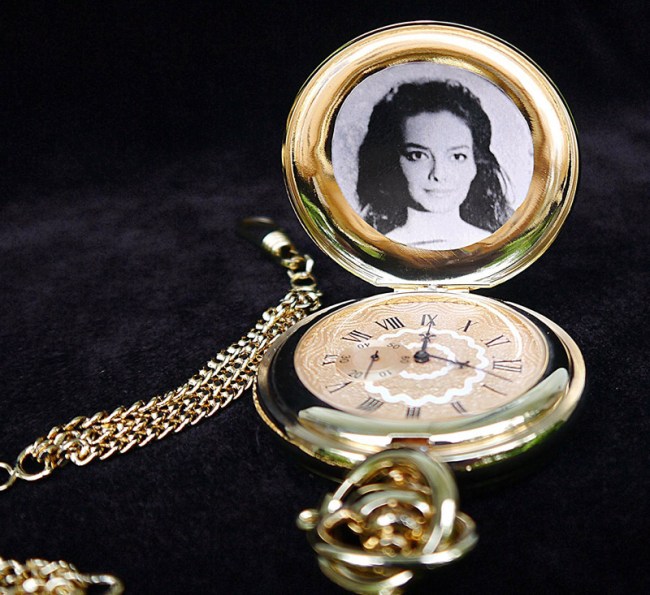 Now this is cool. It’s the pocket watch from the Clint Eastwood/Sergio Leone Spaghetti Western classic, For A Few Dollars More. It plays the entire song from the movie, and it’s fully licensed so you don’t have to worry about it being a cheap knockoff. It’s a must-have for any true Eastwood fan, and really, isn’t that everyone? 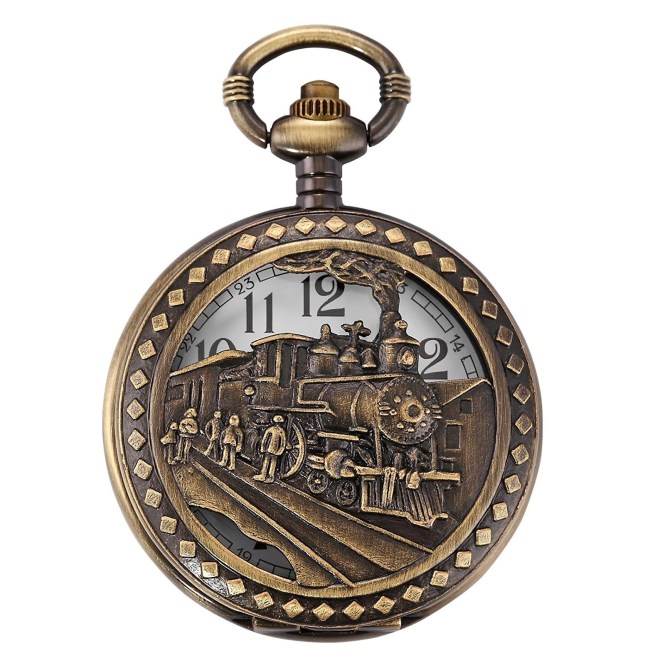 Look, it doesn’t get any more steampunk than a damn steam train. That unique copper design unfolds to reveal an old-fashioned classic watch face, giving you both something bold and original, as well as something classic and timeless. I mean, it still tells time, but the look is timeless. You know what I mean, damn it. It also happens to be one of most affordable pocket watches available. 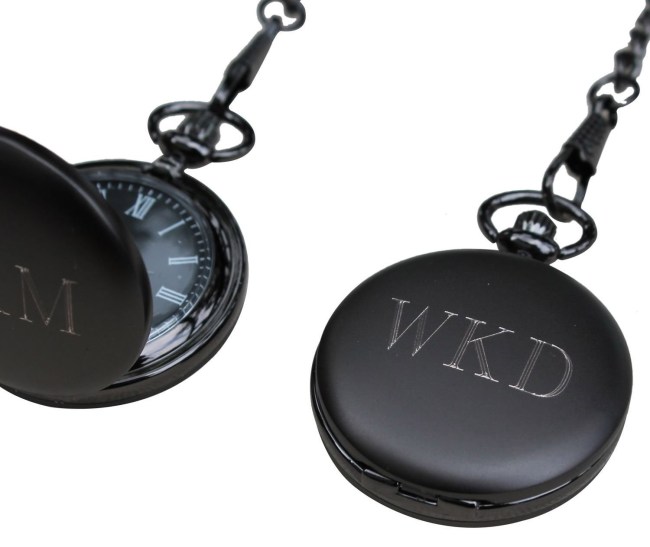 The gunmetal finish is kickass and opens up to a gunmetal colored watch face, giving it a killer look that you won’t find in other pocket watches. But really, the draw here is that the company will personalize your watch with an engraving free of charge when you order it. 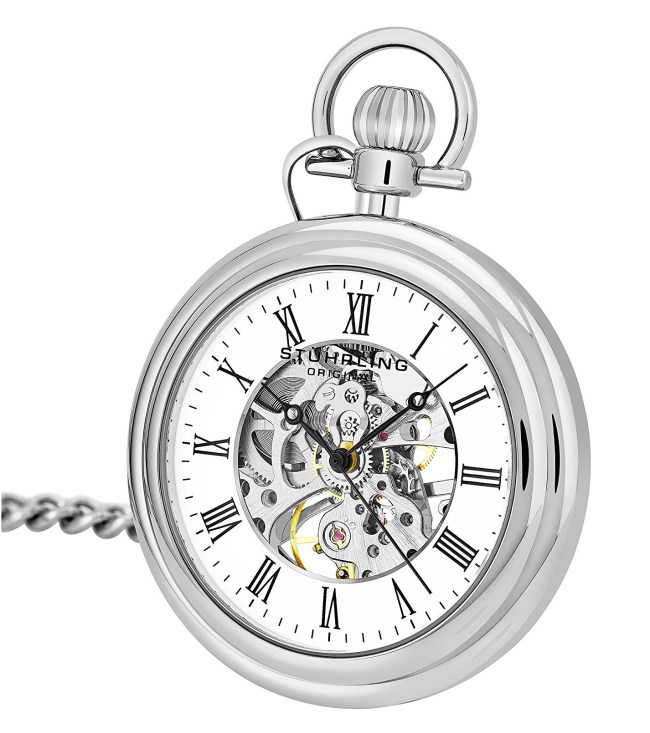 This imported Swiss watch is a step-up in price, which means that it’s a step-up in quality too. First of all, it looks magnificent with a classy skeleton look that trends more towards tailored elegance than full-on steampunk. You have to wind it every day as a manual mechanical watch, but if you do that – and really, the precision care is one of the draws of a good pocket watch – it will work smoothly and beautifully for you. I mean, it’s a Swiss watch. There’s a reason that’s a saying. 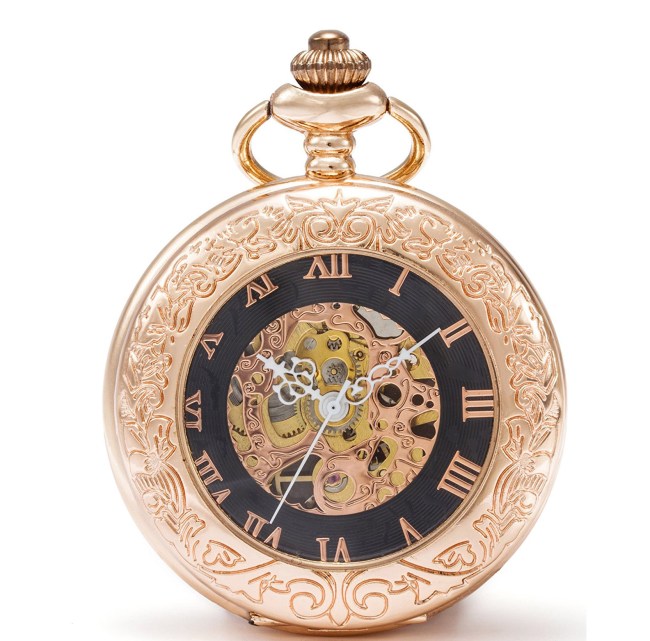 It’s gonna be hard to find anything more ornate looking than this pocket watch. It has a dressy feel that’s showy and bold. Again, a big part of owning a pocket watch is owning one that is an extension of your own style and personality, so if words like “ornate,” “showy” and “bold” are what you want to show the world, well then this is the pocket watch for you. 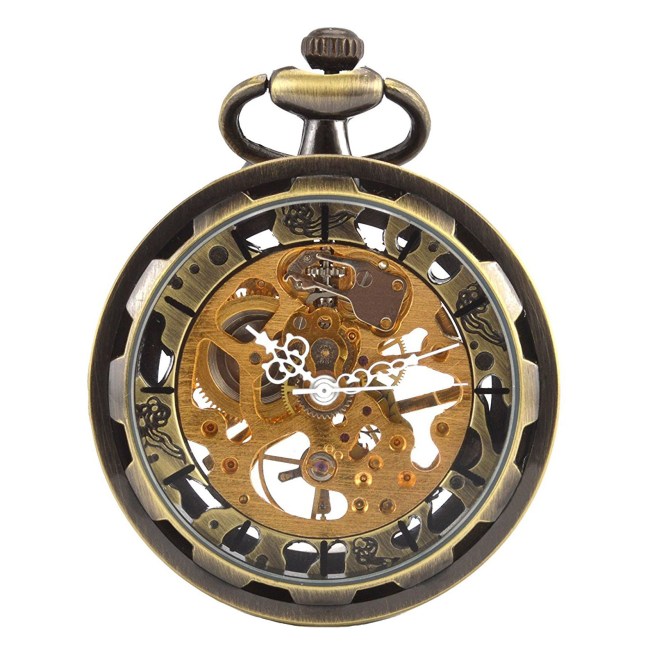 This open-faced skeleton pocket watch is classic steampunk without looking like something a dude in a top-hat and giant goggles would be wearing, if you know what I mean. It’s classic, it’s vintage and it hints at old-school style and class. That’s a combo that’s tough to beat. 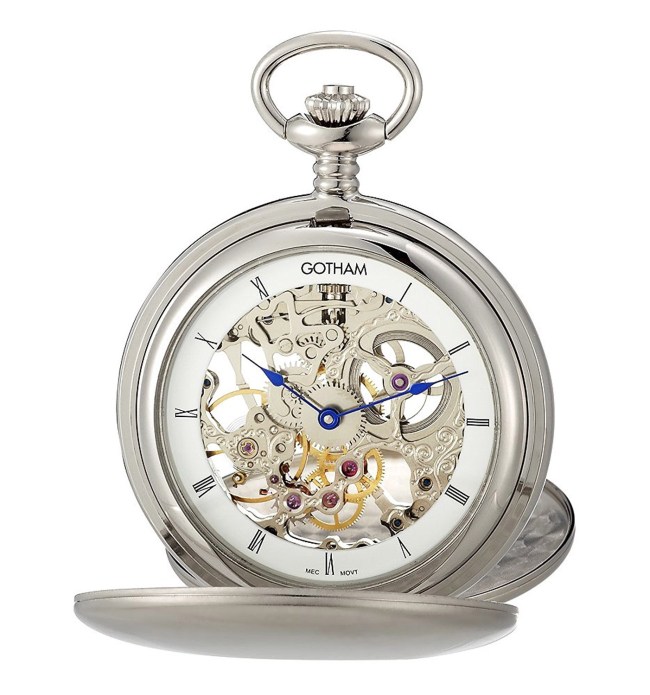 This is a big step up the ladder. It’s not gonna cost you $1,000 or anything, but it’s still a hefty chunk of change. Fortunately, it’s worth it with a design that’s somehow classic and modern at the same time. That’s a tough trick to pull off, but this watch manages it. It’s also scratch-resistant, which matters when you’re dropping a couple hundred bucks. Really, most good pocket watches get by just on their looks – I mean, in the end, that’s what they’re there for, right? – but sometimes it’s nice to have something that doesn’t just look good, but is the real baller deal. It’s more expensive, but you have to ask yourself if it’s worth it to you. If it is, you won’t go wrong here. 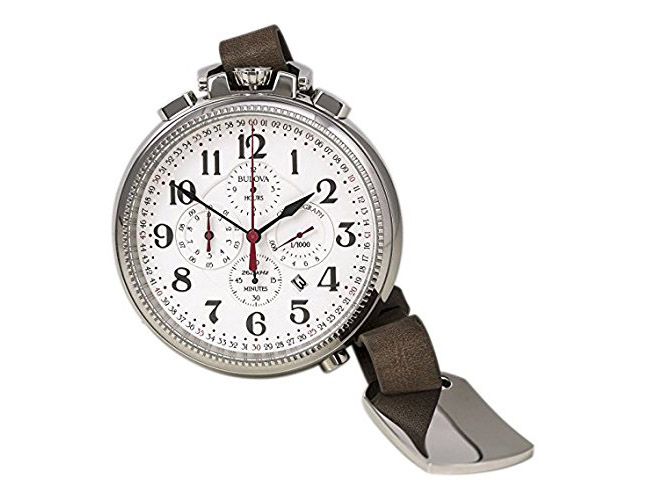 This chronograph style pocket watch is another more expensive one, but that’s because it’s designed for both show and go, with a high-performance quartz that vibrates at a frequency eight times greater than a normal quartz watch. The result? Extreme accuracy that you’d be hard-pressed to find anywhere else. It may not be as flashy as some other pocket watches, but it has an almost militaristic look perfect for a man who means business. 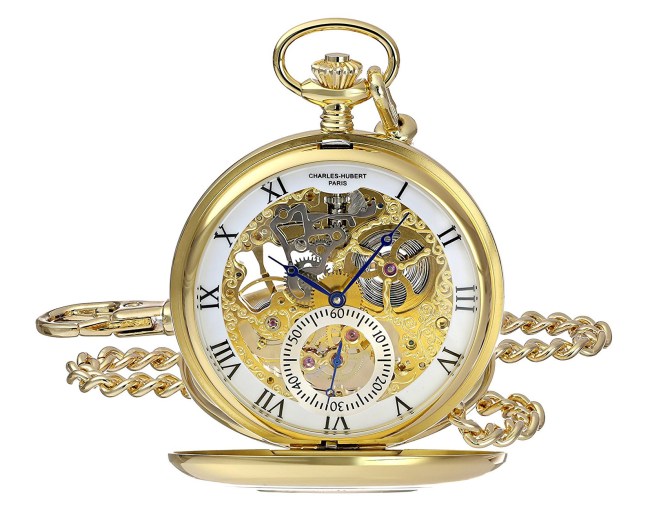 This watch is beautiful, with gold plating around a design that looks like it was taken straight from a noble European family’s crest. It’s also another step-up in price and quality. Again, you have to decide how deep down the rabbit hole you want to go here. 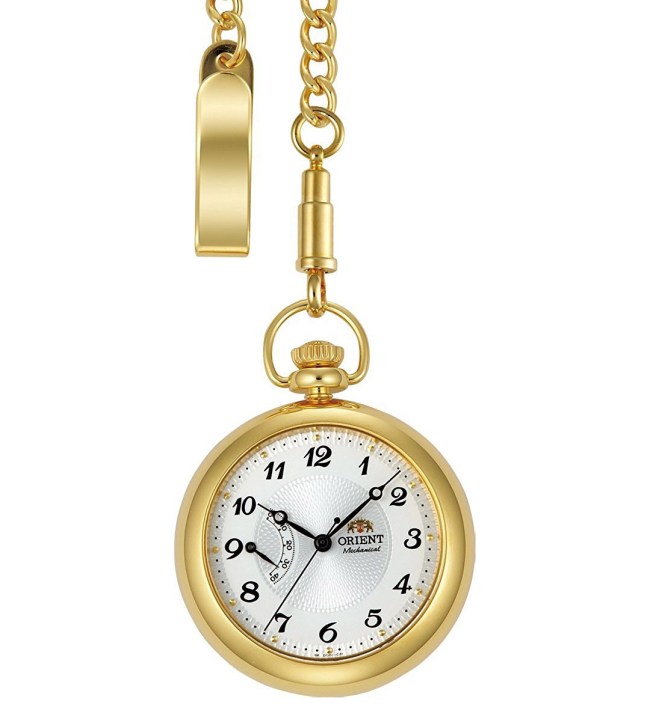 Listen, there are some pocket watches out there that cost $2,000, and they’re probably really, really good. But you know, and I know, that you’re probably not gonna drop $2,000 on a pocket watch just because I say so unless you’re Elon Musk and also if you’re high. But $500? You might be able do that. This is a premium pocket watch, imported from Japan, that’s designed to be tasteful and built to work. This is the perfect watch for that dude who knows he’s a boss without having to splash it around. This isn’t a steampunk watch, it isn’t an aristocrat’s watch. It’s a man’s watch, tasteful and, well, the best.