#detroit auto show
BroBible may earn a commission if you buy a product or service via links in this article.
by Paul SaccaJanuary 14, 2018 6:24 pm

We’ve already seen Ford bring back the iconic Ranger, now Ford is bringing back yet another classic car. At the Detroit Auto Show, the American auto manufacturer revealed the newly resurrected Bullitt Mustang. On the 50th anniversary of the movie Bullitt starring “The King of Cool” himself Steve McQueen, actress Molly McQueen, Steve’s granddaughter, introduced the 2019 Mustang Bullitt GT.

Steve McQueen’s granddaughter Molly McQueen explains her excitement over the unveiling of the new @Ford Mustang Bullitt and the restoration of her grandfather’s original Bullitt… pic.twitter.com/9JePM7Iy1g

In the 1968 movie, McQueen sped around in a Highland Green Mustang GT 390 fastback. In honor of the movie, Ford has made several variants of the Mustang Bullitt, most recently in 2009. The latest 2019 version of the enhanced Mustang GT was revealed at the North American International Auto Show (NAIAS) and it oozes cool.

The commemorative Mustang is much more than just a marketing angle based on a movie with one of the greatest car chase scenes in all of cinema history, this is a legit speed beast. The retro-themed muscle car boasts a 5-liter V-8 engine that pumps out 475-horsepower. Of course, it’s a six-speed manual because Steve McQueen wasn’t driving an automatic. The Bullitt has a top speed of 163 mph, 8 mph faster than the latest Mustang GT. The gear shifter features a white cue ball shift knob and the signature fuel cap are an homage to the original car from the movie.

The Bullitt has much of the same insides as the GT’s Performance Pack including the enhanced suspension, Brembo brakes with larger rotors, Michelin PS4 summer tires. The car features classic torque thrust 19-inch aluminum wheels. Magnetorheological dampers are optional.

The Bullitt features black mag wheels, blacked-out exhaust tips, black front grille, and will only be available in Shadow Black or Dark Highland Green. There is no racing stripes or spoilers or badges because when you’re cool like Steve McQueen you don’t have to be flashy. The special edition Mustang will be available this summer. Pricing has yet to be announced, but you should expect the Mustang Bullitt to be in the neighborhood of $50,000.

A couple pics of the beautiful new @Ford Mustang Bullitt, as debuted at #naias this afternoon. pic.twitter.com/TiaJiJ5brE 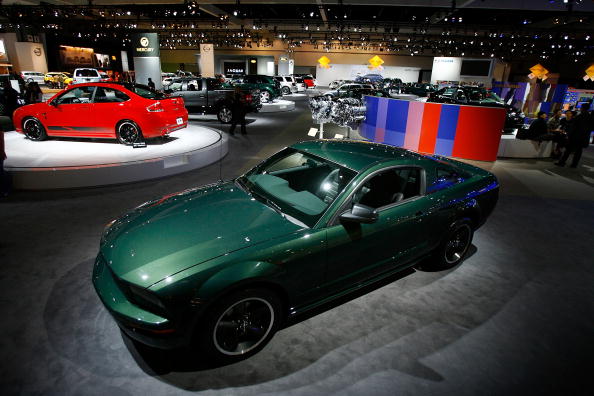 Riddle us this: What’s green, and mean, and took part in the greatest car chase scene? 😏 #FordMustang #FordNAIAS #NAIAS2018 pic.twitter.com/d4M7VWhavS