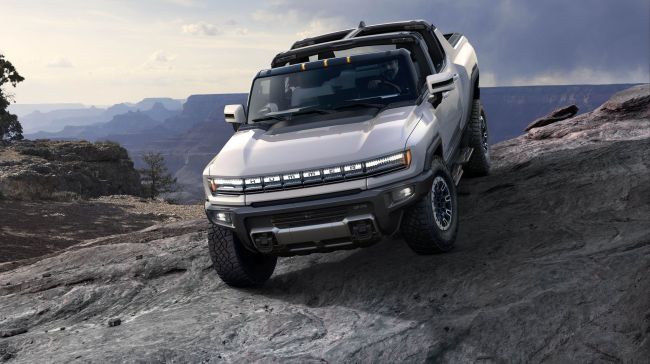 Guess who’s back? Back again. The Hummer’s back with electric motors and a gas engine. Introducing the brand new 2022 GMC EV, the iconic off-road warrior that is quicker than ever, but also a very high price tag.

The quintessential H1 gas-guzzler from the 1990s gets a very modern update with the all-new 2022 Hummer EV is electric, and will be produced in a factory in Detroit that the automaker deemed “Factory Zero.” On Tuesday evening, General Motors unveiled the electric Hummer that boasts a range of up to an impressive 350 miles on one single charge off its 435-pound, 16 kWh lithium-ion Ultium battery packs. GMC claims that the new Hummer will be available with the ultra-fast 350kW charging, which can add about 100 miles of range in just ten minutes. Tremendous.

The new heavy-duty truck boasts an estimated best-in-class 1,000 horsepower and powerful 11,500 lb.-ft. of torque. The brawny sports utility vehicle will speed zero to 60 mph in about three seconds. For comparison, the Lamborghini Aventador zooms zero to 60 in 2.7 seconds and the original Hummer went zero to 60 mph in a very sluggish 18 seconds. In other words, this truck f***s.

The new Hummer will also boast new technologies such as GM’s next-generation driver-assist system that allows hands-free driving on highways.

There will also be a “crab mode,” the rear-wheel-steering function that allows the vehicle to rotate all four wheels at once, allowing the truck to almost park diagonally.

“The standard tires are 35-inch-tall 305/70R-17 Goodyear Wrangler All Territory MTs, with 37s offered as a dealer-installed option,” Car & Driver reports. “The second year will bring Beadlock wheels. Four-wheel steering can point the rear tires opposite the fronts up to 10 degrees, enabling a 37.1-foot turning circle, or can align in phase for Crab mode.”

Inside the cockpit, Hummer EV offers a 13.4-inch entertainment screen and a 12.3-inch display in the gauge cluster that provides relevant information about the status and performance of the vehicle.

The Hummer EV attempts to secure a piece of the coveted EV truck pie, which includes newcomers such as Rivian’s R1T and Tesla’s Cybertruck. The new military-inspired Hummer, which GM declares to be “the world’s first supertruck,” offers a new adaptive air suspension system called Extract Mode that can raise or lower the vehicle’s front and rear suspension by six inches for off-roading benefits.

According to The Verge:

GMC partnered with Fortnite creator Epic Games to use the game maker’s Unreal Engine game development platform for the Hummer’s in-car software, an industry first. Because Unreal Engine is designed to enable photorealistic computer-generated graphics, the software can display full, high-resolution renders of the vehicle as well as its various internal and underside parts and mechanical and software mechanisms.

“This is all about people who just love the best in automotive innovation, performance, capability and technology,” GMC Vice President Duncan Aldred told CNBC. “These are the people who you may have seen buy the exotic sports car type brands. This will be the must-have item.”

“Hummer EV represents the best in what General Motors is capable of in its entirety,” Aldred said. “I really do think it is a beacon of what GM can do and where it’s going to go and the zero-zero-zero future it’s creating.”

“We had one goal for Hummer EV: Build the most capable factory truck – ever,” Al Oppenheiser, GMC Hummer EV chief engineer, said in a statement. “It’s an absolute off-road beast with a unique e4WD drive system that provides maneuverability unlike anything GM has ever offered before.”

All this tech and capabilities come at an exorbitant price. The Hummer EV Edition 1 has a starting price of $112,594. Yowzers. There will reportedly be less expensive models such as a $99,995 version available a year later, followed by less capable models in the price range of $89,995 and $79,995 released in 2023 and 2024, respectively. GMC is also planning an SUV version. Want.