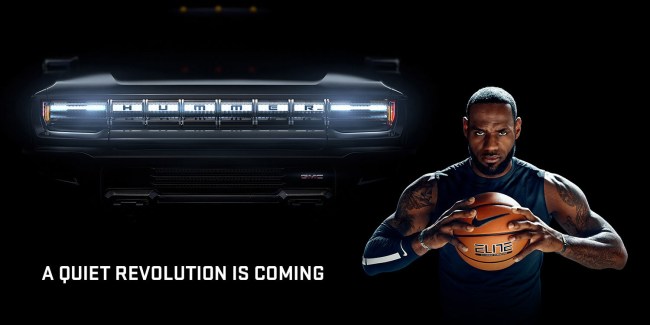 The Hummer was a major success in the late 90s and early 2000s, but the behemoth go-anywhere truck died out like a dinosaur when consumers became attracted to more economical and environmentally conscious. General Motors would stop producing the Hummer H3 in July of 2009. GM is bringing back the Hummer, and it is electric. The new Hummer has been teased in a Super Bowl commercial that stars LeBron James.

The all-new GMC Hummer EV makes the transition from its gas-guzzling ancestors, but that doesn’t mean that it won’t be powerful. The electric Hummer will have over 1,000 horsepower (745 kilowatts) and a reported 11,500 pound-feet of torque. The brute of an electric vehicle will fly from zero to 60 in three seconds. But you’ll still have off-roading capabilities.

GM is touting how quiet the new Hummer will be. General Motors is hoping that the zero-emissions Hummer EV will be their answer to the Tesla Cybertruck and the upcoming Rivian R1T pickup.

The electric Hummer will be produced in GM’s Detroit-Hamtramck assembly plant in Wayne County, Michigan.

You won’t get to see all of the GMC Hummer EV until it is revealed on May 20, 2020, But GM is giving car lovers a sneak peek with their Super Bowl commercial featuring LeBron James.

LeBron James is the GMC ambassador for the new electric truck, and the Los Angeles Lakers star said he is “proud to be part of this.”

The GMC Hummer EV is believed to go on sale in the fall of 2020.