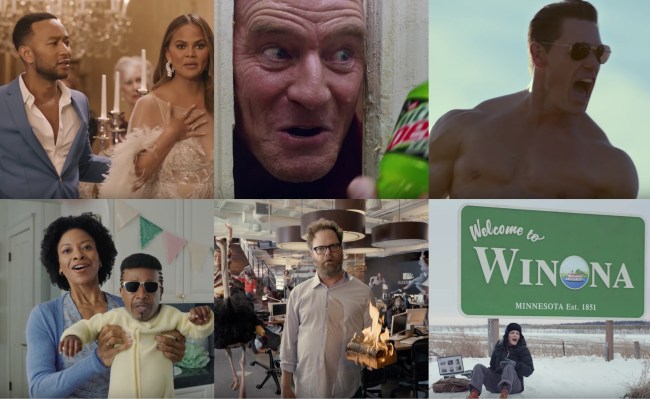 Jimmy Fallon and John Cena will star in Michelob Ultra’s 2020 Super Bowl commercial where the pair go through a workout that leaves Fallon pretty much incapacitated. Michelob Ultra is actually running two commercials for Super Bowl LIV but this is the one that will have everyone talking. This Big Game spot features cameos from The Roots, Usain Bolt, Brooks Koepka, Kerri Walsh Jennings, and more. This SB ad’s chock full of familiar faces and will be one of the top-rated 2020 Super Bowl commercials:

Mountain Dew has enlisted Breaking Bad‘s Bryan Cranston for their 30-second Super Bowl commercial that is a play on the iconic Horror flick The Shining‘s ‘Here’s Johnny’ scene with Jack Nicholson. This ad will definitely be a big ‘Water Cooler Talk’ commercial on the Monday after the Super Bowl LIV.

Doritos is running a Super Bowl ad and thus far they’ve released a handful of teasers. One is a monologue featuring Sam Elliott (from The Big Lebowski), another features Lil Nas X, and another is a ‘Post Limón’ teasers. Here are the three Super Bowl LIV commercial teasers from Doritos which have debuted so far:

John Legend and Chrissy Teigen will appear together in a Super Bowl commercial for the Hyundai Genesis that makes fun of “old luxury” as a way to show this car is (allegedly) great for younger car buyers.

Rainn Wilson who played Dwight Schrute on The Office has teamed up with Little Caesars for a Super Bowl LIV commercial, a full 60-second spot during the Big Game.

Facebook’s first-ever Super Bowl commercial will feature Chris Rock and Sylvester Stallone. The Super Bowl LIV commercial from Facebook will run during the game’s 4th quarter and thus far there are only teasers of their “More Together” spot but here those are:

Cheetos has teamed up with MC Hammer for their 2020 Super Bowl ad. Going with the ‘Can’t Touch This’ angle for all of that orange residue left on your hands after eating Cheetos:

Here’s the previous teaser from Cheetos:

Tide’s Super Bowl LIV ad features Charlie Day from It’s Always Sunny in Philadelphia and Emily Hampshire from Schitt’s Creek who ‘air out their dirty laundry’ for this 60-second spot. This is Emily Hampshire’s first Super Bowl commercial and one she was admittedly nervous to film because it puts such a massive spotlight on the actors.

Audi’s “Let It Go” Super Bowl 2020 commercial stars Maisie Williams who is world-famous for playing Arya Stark on HBO’s Game of Thrones. I’m currently in the market for an Audi myself so I’m not sure if that’s the reason why this one is sitting so well with me or if it’s Arya Stark. Either way, I dig this Big Game spot a lot.

Pringles has enlisted Rick & Morty for their 2020 Super Bowl commercial that features ‘infinite dimensions’ of flavors:

Heinz will run four commercials at once. I think there will be a decent amount of chatter about this but I suspect it will confuse just as many people as those who find it engaging. Their 2020 Super Bowl commercial’s directed by Roman Coppola!

Walmart’s first-ever Super Bowl commercial is a 60-second “Famous Visitors” spot featuring iconic ‘out of this world’ characters like Buzz Lightyear from Toy Story, the USS Enterprise D from Star Trek, and more.

Porsche is rolling out ‘The Heist’ as their Super Bowl LIV commercial which features a wild car chase scene that you’d expect to see in a Hollywood film but it works great for Porsche.

Pepsi Zero Sugar has enlisted Missy Elliott to rep their campaign in a cover of the Rolling Stones iconic ‘Paint it Black’. This one’s kind of forgettable for me but I have a hunch there will be more to it down the line.

Budweiser will feature multiple Super Bowl commercials this year. Their unifying theme is ‘Typical American’ with this being their prominent ad:

Bud Light is reportedly going to allow fans to pick which of their 2 spots will run during Super Bowl LIV. They have a bunch of Bud Light Seltzer teasers up on their YouTube including this one of Post Malone. Here are the two teasers they’ve released so far:

Discover will be showcasing two 15-second commercials during Super Bowl LIV. One will focus on how they don’t charge annual fees and that ad kick off with Dr. Evil and others. The second 15-second spot focus on how Discover is accepted at over 95% of places in America that accept credit cards.

Avocados From Mexico’s ‘The Avocados from Mexico Shopping Network’ TV spot that will run during the 2nd quarter of the Super Bowl:

Microsoft’s ‘Be The One’ Super Bowl commercial highlights Katie Sowers, the San Francisco 49ers’ offensive assistant coach who is about to become the first-ever woman to coach in a Super Bowl. This Super Bowl LIV commercial for Microsoft was created by McCann New York.

Winona Ryder stars in this Squarespace Super Bowl ad that was created in-house and features Winona putting Winona, Minnesota on the map.

Reese’s ‘Take 5’ ad is pretty solid. This is a 30-second Super Bowl spot created by McGarryBowen that features their least-famous candy bar but I think this ad will have people talking on Monday.

I’m a sucker for dogs in Super Bowl commercials (remember the Budweiser dogs?!?) and WeatherTech is going to have people talking about this ‘Lucky Dog’ ad that’s designed to drive donations to the University of Wisconsin-Madison’s veterinary school.

Last but not least, the NFL will run its own commercials during Super Bowl LIV in Miami. The NFL has released a few different TV spots so far but I’m certain more will come:

I will say that I’m surprised Peloton isn’t running a Super Bowl commercial this year. After all of the blowback on their holiday TV spot, it seems like this would’ve been the perfect opportunity to poke fun at that and put themselves in front of tens of millions of Americans.