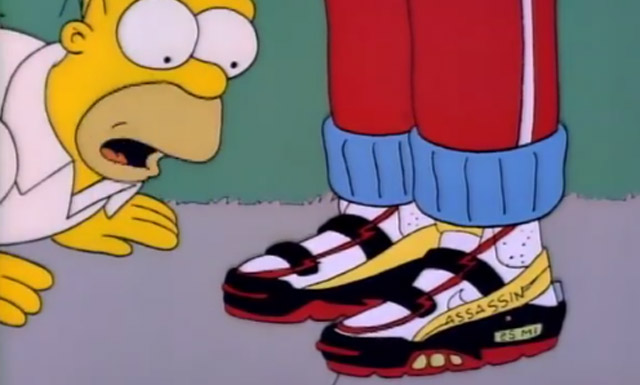 Forget Steph Curry’s Under Armour dad shoes, Homer Simpson’s ‘Assassin’ sneakers are the ultimate dad kicks and now someone actually made them real!

Long before Under Armour was a glint in whoever the person who founded Under Armour’s eye, the ultimate dad shoe was worn by one Homer J. Simpson. Sadly, thanks to the Simpson’s impish dog, Santa’s Little Helper, they were tragically destroyed.

Of course, because this is The Simpsons, Homer’s annoyingly nice neighbor, Ned Flanders had also copped a pair of Assassins complete with Velcro straps, a water-pump on the tongue, a built-in odometer, reflective sidewalls, and vanity license plates on the back.

And now, thanks to the genius of Mache Customs, they’re real!

Thought I’d do my own twist on this whole dad shoe, Sharpie-style custom thing that’s been going on by mixing the “Asssassins” from the Simpsons- one of the most coveted shoes to have never existed with one the greatest dad shoes to ever exist, The Air Monarch. Obviously this is for fun so don’t take these too seriously but I hope they give you a good laugh. #makemonarchsgreatagain #teamMonarch #complexkicks #custom #angelusdirect #thesimpsons #90s #homer #hypebeast

Bet if these were ever mass produced they’d outsell whatever the “Chef Curry” shoes did.