#Cars
BroBible may earn a commission if you buy a product or service via links in this article.
by Paul SaccaFebruary 9, 2021 3:59 pm 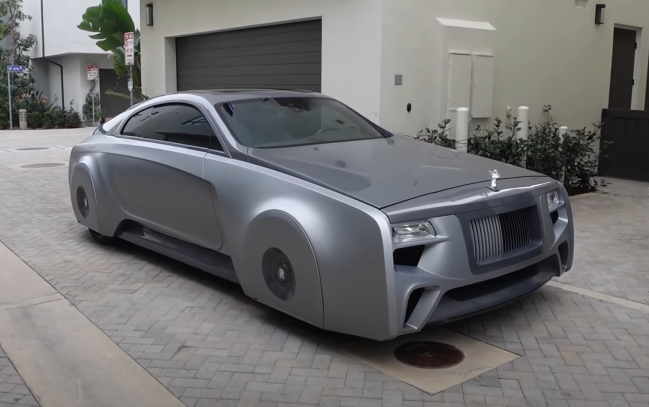 The year was 2004, a simpler time when one of the biggest TV shows was Pimp My Ride, where rapper Xzibit helped people make their extravagant car dreams come true. The West Coast Customs shop would perform obscenely over-the-top customizations on regular cars. The custom car shop would install LCD screens on mudflaps and 24-inch spinner rims on a 1998 Ford Explorer, hang chandeliers inside a 1991 Geo Metro, a chocolate fountain in a 1997 Toyota RAV4, and trick out a 1988 Chevy S10 with a pool table and fog machine. Pimp My Ride the television show is long gone, but the West Coast Customs shop is still doing insane car makeovers – most recently for 26-year-old Canadian pop singer and celebrity Justin Bieber.

West Coast Customs announced on Monday, “After years of R&D, we created our own version of the 103EX. A futuristic, awe-inspiring, daily drivable Rolls-Royce unlike any other.” Instagram posts include photos and videos of their out-of-this-world creation, which is hardly recognizable from the original.

Apparently, the ridiculously remodeled Rolls-Royce belongs to Justin Bieber. YouTuber Gordon Cheng, whose channel is called Effspot, shared video of the rocketship Rolls-Royce with the completely redesigned bodywork. Footage of Bieber’s new ride starts at the 5-minute and 37-second mark.

The original car is a Rolls-Royce Wraith, which costs $330,000 and boasts a 6.6-liter V12 engine that pumps out 624 horsepower and 605 pound-feet of torque. The sleek yet wider custom one-off has no visible handles, and no side mirrors, instead the car utilizes cameras. Most notably, the wheel well has been nearly completely covered.

We have no idea how much the dynamic transformation cost, but it’s likely that Justin Bieber, who has a net worth of $285 million, can afford it.

If you have a $330,000 Rolls-Royce Wraith, are you doing this to your prestigious luxury automobile?