Nate Bargatze’s The Comedic Genius We All Needed During Quarantine 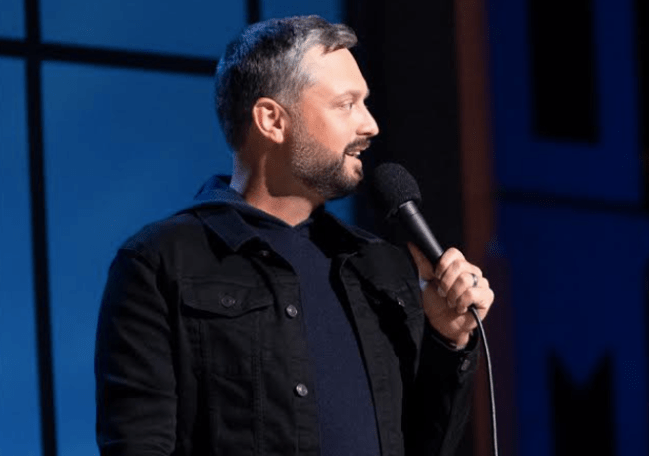 Presented in partnership with TravisMathew…

Nate Bargatze’s comedy is one that’s relatable, and it’s almost as if the 42-year-old comedian from Nashville is that kooky uncle who tells the most entertaining stories anytime the whole family gets together. That’s not to say that what Bargatze does is easy, and he’s well aware of that.

For as long as he can remember, Bargatze’s goal was to become a comedian. In fact, as part of a high school assignment, he was asked where he saw himself in a decade, writing down that he hoped to be performing at the legendary comedy club in Nashville called Zanies. Yep, it’s almost as if Nate Bargatze manifested his entire career — and has worked his ass off to make it a reality for himself.

The comedian recently joined TravisMathew‘s Life on Tour video series to describe his surreal journey. From his high school dream to doing standup shows to his breakthrough Netflix special, it’s been a wild ride so far. Take a look below to see the episode.

What I find so interesting about Nate Bargatze is his honesty. He knows his role as a comedian is to distract the audience through humor, which is why he takes such responsibility in his job. Given the response — which resulted in a relationship with Netflix — it’s pretty obvious that he’s killin’ it.

Just a year later, Netflix came back, offering Nate the opportunity to film another special during the pandemic — but outside at Universal Studios and with social distancing.

“I just wanted to be the break that I think everybody needs,” Nate says about his new special, The Greatest Average American. “You know, there’s a big trust you have with an audience when they are like, ‘I trust I can come to you and I know it’s just going to be funny; it’s not going to be anything heavy.’”

Talented, successful and humble, Nate Bargatze is just scratching the surface. With his comedy career exploding during the pandemic — with millions of people tuning into his Netflix specials and Nateland podcast — he’s giving the people what they want.

“Being funny is a muscle, and so you want to keep it going. I just wanted to do something fun and funny with my friends — to be easy listening for people and give them something to laugh at.”

One of the premier men’s lifestyle brands, TravisMathew creates versatile, everyday apparel that’s engineered for both business and casual adventures. Blending comfort, style, function, performance and innovative design, the brand has something for every man to live his best life.