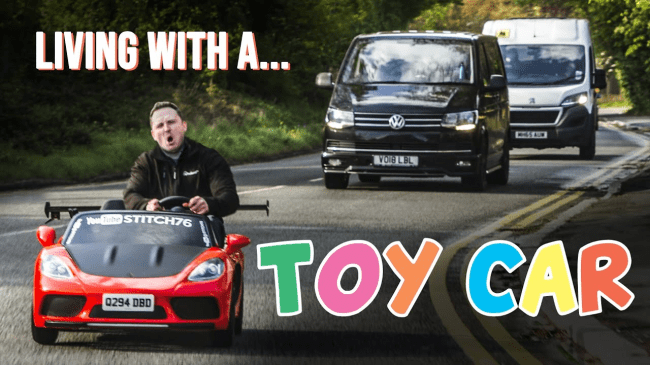 A guy over in the United Kingdom built the world’s first street legal Power Wheels toy car with a top speed of 22 mph and literally drives it all over the place.

Designed and built by YouTuber James of Stitch76, the RiiRoo Super Sport XL comes complete with doors, real pneumatic tires, headlights, turn signals, brake lights, a stereo, and something that might pass for seat belts. There’s even a Turbo button which makes use of the car’s upgrade from a 24v, 180W motor to a 48v, 650W brushless motor.

Unfortunately, seeing as how it’s, well, a car made for kids, there is no suspension system, so the ride can be a little rough. Also, it isn’t very good for making an long trips with its range of just 4 miles (or 45 minutes of run time).

The car can even support a passenger, although the extra weight and lack of legroom seem like they would pretty much kill any joy of driving it unless they are a very small person. Like this…

How the car is considered to be street legal is a bit of a mystery as the car could literally get flattened by a passing truck, as is why did he build it in the first place?

“During lockdown, I bought my kids, all of them, a little ride-on toy car,” James reveals. “And I absolutely loved driving around in it. And then I was bored in lockdown. I challenged myself to say can you make it road legal?”

The Drive suggests that perhaps the toy car is road legal due to something called the Basic Individual Vehicle Inspection over in the United Kingdom which allows kit cars and other unique vehicles to be considered legal without requiring them to go through the rigorous testing of production cars.

James says he is far from being done tinkering as his ultimate goal is to get the toy car to run up to 60 mph. Awesome.