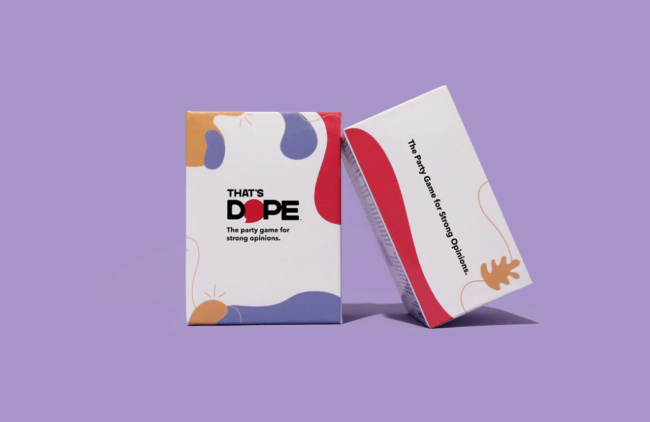 Getting the vibes right early on, especially while hanging out with people you may not know all that well, is essential for having a great night. If things don’t get off to a good start, then there’s a good chance that the night is going to be a disappointment. This is why party games were invented, and That’s Dope is the perfect card game to get the night going in the right direction by letting people share their opinion on practically any topic imaginable.

Think about it, everyone has strong, differing opinions about literally everything. Hearing people’s opinions about random subjects then leads to great conversations, some laughs, and allows everyone to get to know each other. That’s Dope checks all of those boxes, and then some.

The game is simple. There are topic cards and there are voting cards. The topic cards are the conversation-starting cards and could have a statement like ‘telling someone your salary if they ask’ or ‘unfollowing someone after you break up’ or a celebrities name, like John Cena. Each player gets a ‘dope’ card or a ‘nope’ card that they use to cast their vote on the subject at hand.

The guesser, the person who presented the topic card, then has to guess how many of the players voted ‘dope’ or ‘nope.’

Where That’s Dope can really get the night going is when drinks are involved as it really does make for the perfect drinking game. Remixing the rules never hurt anyone, so having the guesser drink if they incorrectly guess the number of ‘dopes’ and ‘nopes’ and then having the voters each take a drink if the guesser is correct ramps up the pace of the game.

My wife and I, both in our late 20’s, recently moved, and you know how it goes, you meet your neighbors, say you’re going to have one another over for dinner, but that doesn’t really happen until weeks later. Well, it happened. We had our neighbors over for drinks and dinner and after initial conversations started to hit that somewhat awkward spot, I reached for That’s Dope. It was the perfect icebreaker and allowed us to quickly get to know one another.

Things didn’t get competitive by any means, they’re not really meant to with this game, and it certainly kept the conversation going and still gives us certain memories from the game that we still bring up weeks later.

The Core Pack for That’s Dope comes with 288 topic cards and 12 total voting cards, allowing anywhere from 2-6 players to join in. You can even create your own expansion pack that may be more suitable for your specific friend group. There are also virtual editions available to play as well as a print-and-play edition.