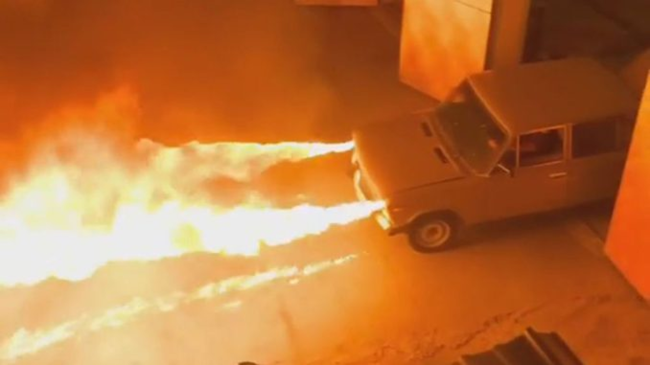 Russian hot rod enthusiast Vahan Mikaelyan customized a car to shoot jets of fire from its headlights. Perfect for your morning commute.

The car, a VAZ-2106 Zhiguli, commonly called a Lada 1600, is, at least according to Mikaelyan, the first in the world that can spew fire.

In video he posted online, Mikaelyan shows how the Lada, which he has nicknamed the “Dragon,” utilizes two of the four headlight compartments to shoot streams of fire over 20 feet, hitting the wall at the far end of his demonstration area.

Mikaelyan doesn’t explain how he created the flame-throwing car, but educated viewers suggest he may have installed a pump to generate the power to blast the flames.

“Some station wagons and SUVS have a separate windshield washing reservoir reserved for the rear window/wiper. Replace the spray nozzle with one pointing directly aft of your vehicle and fill the reservoir with a mix of gasoline and diesel fuel. Run a 12v line from the battery to a spark plug mounted next to rear facing nozzle activated by the spray pump relay. No more tailgaters! You may want to rig a fire extinguisher back there as well, just in case!” one viewer theorized.

“Friends, you have seen the powerful fire my Dragon spits. Therefore, on 15th August, we will burn the losing car with the Dragon. Make your cars better! There is going to be a hot car battle,” Mikaelyan wrote.

This car that shoots flames out of its headlights also isn’t first wild vehicular creation Mikaelyan has unleashed on the world. He has also built a a monster truck with huge wagon wheels and a car that looks like a spider with eight legs.

Viewers of the flame-throwing Lada on Reddit offered numerous very helpful comments and suggestions for Mikaelyan and his wild vehicle.

“The only downside I see is you would have to be stationary or driving pretty slow to use it without lighting your own car on fire,” wrote one viewer. “Now if you mounted it to the back it would be great for tailgating a–holes with LED headlights and you probably wouldn’t catch yourself on fire either.”

“Fun fact: in south Africa, it is completely legal to mount a flamethrower to your car to deter car [thieves],” commented another.

“This is so useful. They should put this in every car,” wrote another viewer, while someone else simply commented, “Shut up and take my money!!!!!!!”