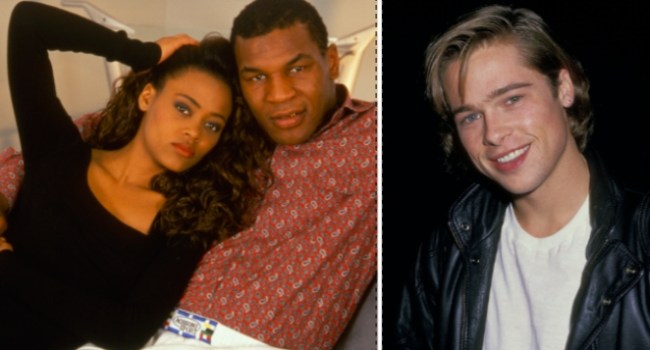 In 1988, a 25-year-old Brad Pitt was a more or less a nobody in Hollywood circles. Aside from guest appearances on Growing Pains and 21 Jump Street, Pitts only roles were uncredited parts in forgettable shows.

Pitt’s true breakout (and most courageous) performance occurred in 1988 when he sexed Robin Givens in the midst of her divorce to World Heavyweight Champion boxer Mike Tyson. Tyson, who would then go on to call givens a “pig” who “stole his money,” was  “mad as hell” at the discovery. Tyson claims he holds no ill will toward the A-list actor and even calls him “pretty” and a “really nice guy.”

DJ Whoo Kid: So he really was scared to death?

Tyson: Scared to death. I was kind of scared because I didn’t know if he had something, so I was like ain’t this some bullshit.

DJ Whoo Kid: You gotta have a lot of courage to like go to Mike Tyson’s house and like…

DJ Whoo Kid: What kind of clothes he had on? He had some whack ass jeans or something?

…I was crying a little bit. That stuff hurt.

Tyson has previously spoke on the incident, adding new details, like saying Pitt looked like “he was probably selling his body for money or something.” LOL. In an interview with Global Grind a few years back, Tyson said:

“I hope Brad don’t think I’m mad at him. I’m not mad at this guy, no way. I was getting a divorce. I was going to my lawyer’s office to divorce her that day but I wanted to sneak in a quickie. Apparently, Givens was also spending time with Pitt. This particular day, someone beat me to the punch. I guess Brad got there earlier than I did. I was mad as hell. You should’ve saw his face when he saw me.”

Robin Givens: worth it.

Gosh…#RobinGivens played the fuck outta this role as #JaquelineBroyer in #Boomerang a female mack. 😍😍😍 I think imma watch this soon.

Premiere night for #godsnotdead2 I always prep with #muradskincare ! Thank you #stylePR for getting me dressed