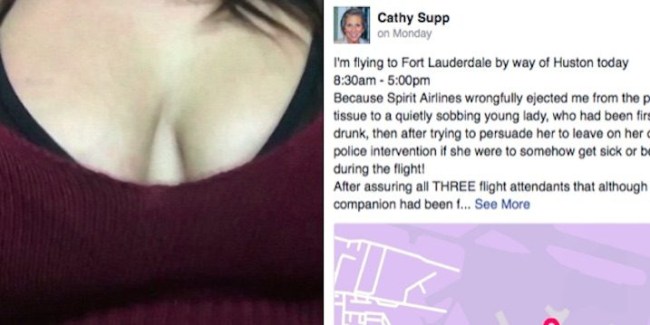 It’s not that hard to get kicked off an airplane if you’re a douchebag.  All you have to do is piss your fellow passengers off with whatever narcissistic, attention-seeking impolite bullshit for flight attendants to boot you like the inconsiderate toolbag that you are. But this girl? Not sure if that’s what’s going on here. She was kicked off for wearing a revealing, low cut top on a Spirt Airlines flight and not allowed to reboard, with the flight attendants accusing her of being drunk.

via NBC 10 in South Florida:

“Nobody was taken off a plane because of cleavage,” Spirit spokesman Paul Berry said. “People are taken off of planes because of their behavior.”

Berry said the woman was intoxicated and a flight attendant spoke to her about it.

“The flight attendant made that decision, and as she was leaving, she said, ‘By the way, you might want to cover up.’ It was more of a personal statement to her,” Berry said.

Donna Prieto said her daughter was “humiliated” on the flight.

She and some witnesses said the woman used a large coat to cover up, cried and then some passengers started to complain.

Based on this passenger’s testimony, it seems like some flight attendant had a case of the Mondays. You think a flight from two of America’s all time great party towns — New Orleans to Fort Lauderdale — would have some chill, but apparently Spirt Airlines was lacking in that department on this particular Monday.