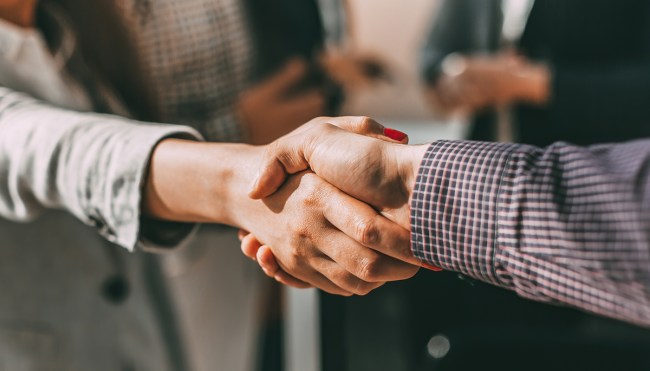 Congratulations! If you’re reading this, you’re presumably in a serious relationship with someone, which is probably pretty great.

However, you’re also presumably nearing that fairly dreaded (yet virtually inevitable day) where you’re going to have to meet her parents—and if you’re seeking the advice of a stranger on the internet, you’re probably pretty nervous about everything that could go wrong.

As someone who’s experienced that kind of introduction firsthand, I would urge you not to stress too much. Sure, you’re going to need to put some thought into it, but as long as you don’t overthink things, it should turn out just fine—especially if you keep this list of tips in mind.

This is hardly a groundbreaking tip, but I still felt that it earned a spot on the list. First impressions are everything and the way you dress will say a lot about you to her parents.

Even if you normally dress casually and look dashing in a baseball cap, a super laidback look could come off as sloppy. Dressing nicely makes the right impression and boosts your confidence level.

2. Rehearse the Story of How You Met

Parents tend to begin the questioning portion of the night with “How did you two meet?” Telling them that you met blacked out in a bar, made out in a dark corner, and then engaged in a casual hookup relationship before becoming exclusive is not an option.

Talk to your girlfriend pre-meeting to ensure that your stories line up. Otherwise, you might both blurt out totally different versions of how you met making things awkward before you’ve even given your drink order.

Would you go on a job interview without doing research on the company? Apply this attitude towards meeting your girlfriend’s parents by prepping with information on what line of work they are in, if they are outgoing or reserved, their sense of humor, etc.

It’s also beneficial to know the family background like whether or not her parents are remarried, if they have other children from their previous marriage, if grandma is still alive, and other potential dicey subjects.

Additionally, asking your girlfriend questions about her family before you meet them scores you points with her because she’ll know you’re
making the effort.

This isn’t the case with every family, but in many families, the mother wields the bulk of the power. She’s the one who’ll invite you over for dinner, defend you against her husband if you ever wind up on his bad side, and remind your girlfriend of what a great guy you are the next time she is crying over something dumb you did.

Flattery and good manners are all you will need to win her over. Compliments on her appearance or cooking are always good and offering to clean up after dinner or fix something around the house that you notice needs help will seal the deal.

Fathers will always have a harder time accepting you. Having another man swoop into their little girl’s life and start to take over doesn’t settle well with dad. More importantly, they were once twenty-something too, so they’re going to be aware you don’t just like their daughter for her personality.

Dad might be difficult at first, but if approached strategically, you can get on his good side. Prep by finding out his interests in advance and then work from there. If you share a similar interest, make sure you touch on that during the conversation.

Sometimes by simply stating a fact you can get something going. If you said the following to my father, he could probably talk to you for five hours: “So, Victoria tells me you’re an avid golfer…”

Avoid excruciatingly long awkward silences by keeping some topics of conversation in your back pocket. It’s always good to ask a lot of questions and show interest in their family life but if that starts to get stale bring up something else or give them a glimpse into your life and interests.

Other suggested topics include your job, your family, sports, current events, movies, and pets.

Topics to stay away from include: politics, religion, money, and jokes.

Yes. Jokes Until you have a solid understanding of their sense of humor, you should refrain from making any jokes.

Regardless of the occasion, a bottle of wine is usually appropriate (of course, you want to refer to Rule #3 and do some research to make sure her father is not a recovering alcoholic before you present him with alcohol).

Floral arrangements or some form of a dessert are also nice gifts and including a note adds a personal touch. The guy I brought home wrote a thank you letter after meeting my parents and mailed it to the house like it was the 1960s.

My mom showed that letter to my Grandma, my aunts, her friends, my friends, and anyone with eyes. She still talks incessantly about what a gentleman he is and now has exceptionally high standards for all future boyfriends. I’m still dodging questions from the family about when they’ll get to see him again… that polite bastard.

8. Have an Exit Strategy

I’m about to tell you a major female secret that I probably shouldn’t share but am going to anyway. The cardinal rule of dating for girls is to leave the guy wanting more. We end dates early on purpose to leave you wanting more and looking forward to seeing us again. It almost always works. This is what you want to do with her parents.

Overstaying your welcome makes you a burden. You don’t want to be the stage five clinger in this scenario; you want to be the one that almost got away. When things start winding down, mention how you’d love to stay but have an early meeting the following day and really need to head home. Leaving on a high note makes them look forward to your next get-together.

As long as you’re polite, personable, animated, and respectful, her parents will love you. Showing that you respect and take good care of their daughter wins points also. Little gestures like holding doors open or pulling out her chair will not go unnoticed.