Golfers in Florida were treated to an unbelievable sight when a decent sized alligator came trudging across the course carrying a truly massive fish in its mouth. As a born and raised Floridian, I wouldn’t say that there’s anything too remarkable about the size of this alligator. It’s a good size, but it’s not one that you’re likely to stop and take pictures of or anything like that…But that fish!!! 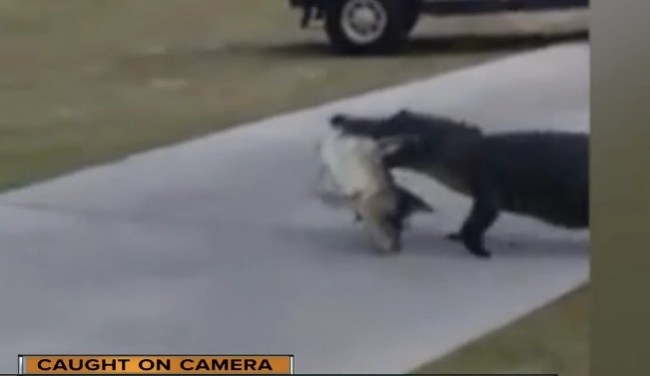 I can’t really get a good look at what species of fish that is. This was filmed in Trinity, Florida which is northwest of Tampa, located roughly between New Port Richey and Tarpon Springs. Given the size of that fish and the fact that this was filmed miles and miles away from saltwater, I’d say it’s some sort of carp or catfish. But the video’s so grainy it’s really hard to tell. And there are actually a ton of saltwater species of fish in the freshwater lakes of golf courses across Florida. It’s not at all shocking to find tarpon and snook in the lakes of golf courses located within 10 or so miles from the coast or a river.

This lady’s commentary is amazing…’Awwww’…She’s somehow showing adoration for this alligator carrying a gigantic fish across the course instead of freaking out like a larger percentage of the population would be doing.

ABC Action News caught up with the woman who filmed this clip if you’re looking to squeeze in a little more commentary: