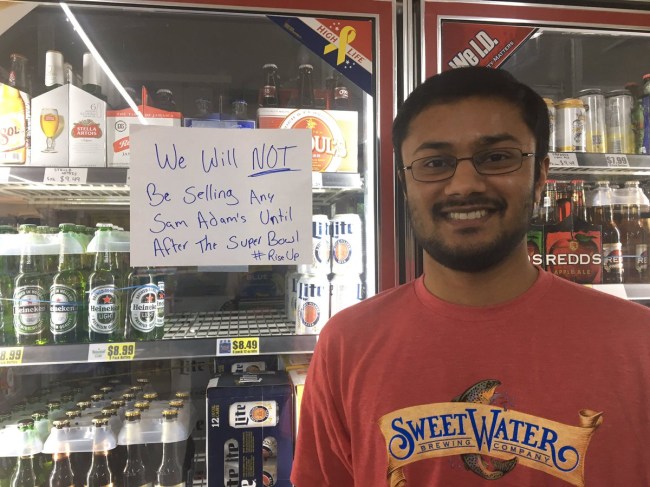 I’m a big fan of Super Bowl bets, as well as Super Bowl shit talk. New England and the ATL are home to two of America’s best craft breweries — Samuel Adams and the Sweetwater Brewing Company, creators of one of my favorite pale ales on the planet, the Sweetwater 420.

In the spirit of a quality Super Bowl bet, the two breweries are beefing on Twitter after a Georgia gas station banned the sales of Samuel Adams. To up the ante, the breweries have both agreed to the following terms:

Man, we really were craving some Sam Adams today… This is Viral, and he's on a mission to prove Atlanta is a great sports town. pic.twitter.com/GVPhpNM1gX

Won’t be their only loss. #OneMore #Patriots #SB51 https://t.co/2PbYriu7EB

.@Sweetwaterbrew Sounds like you need #OneMore employee to help with production…Let’s up the ante – loser wears winning team’s colors? #SB51

Super Bowl bet: Sweetwater vs Sam Adams. Brewer w/losing team has to work as an intern in other brewery & rename a beer after winning team

Come laugh at something other than the Patriots losing and @SamuelAdamsBeer having to rename their beer #RiseUp https://t.co/qixeWkw7dk

.@SamuelAdamsBeer what color would that be, white? Like the flag you'll be waving come Sunday?

We cooked up a lil victory playlist for Sunday night featuring artists from this year's @420fest lineup: https://t.co/BzqHRZnTa2

Quote of the century right there from the Big Kahuna: "Get ready to do the dirty bird! Watch this, Koch, #RiseUp!” @SamuelAdamsBeer https://t.co/6PUbBqHEwp