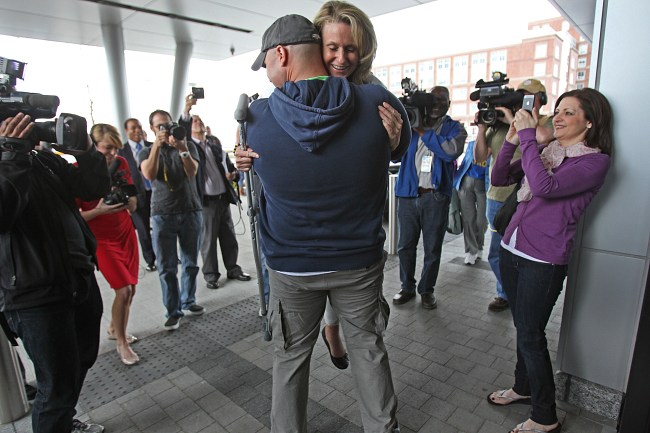 If there are any positive takeaways from the Boston Bombing tragedy in April 2013 that killed three people and wounded 264 more, it’s this one.

Roseann Sdoia proved that its possible to have the worst day of your life and the one of the best simultaneously. The 48-year-old long distance runner was laid up with an amputated leg after a pressure cooker bomb that went off at the finish line of the Boston Marathon severed

In the midst of the chaos was Mike Materia, a 37-year-old firefighter who scooped Roseann from the disaster and secured her in a police vehicle headed for Massachusetts General Hospital.

While in the hospital, Roseann’s mother registered Mike’s compassion and unwavering concern for a stranger and decided to play matchmaker. Momma knows best!

“In the hospital, my mom tried to set me up with him,” Sdoia said.

Materia visited a couple days later while Sdoia was recovering in intensive care and continued to be a beacon of hope and joy for Roseann and her mother, despite them both grappling with the emotions brought forth from Sdoia’s grave injury.

“I was probably not the nicest to him from the get-go. I was in pain. But now we laugh and blame it on the morphine,” Sdoia said.

Over the next few weeks, Materia and Sdoia began connecting as friends, resulting in Materiadoing the leg work to track down a worthy prosthetist to get Sdoia back on her feet. As time went on, Sdoia’s feelings for Materia grew stronger and stronger. 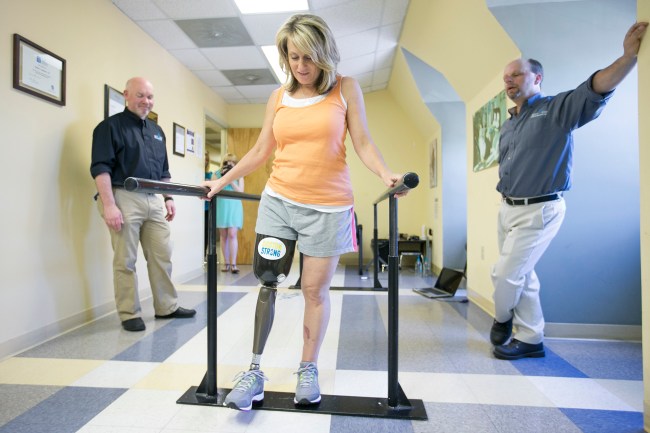 “I knew I was starting to have feelings for him because he was so kind and caring,” she said. “And he has an unbelievable smile.”

Two months after the bombing, the two went on their first date. Then, they spent the Fourth of July on Nantucket. And just last month, he proposed on a lookout deck at the Nantuckets’s whaling museum with the help of the dog they share, Sal, according to the New York Post.

The dog was wearing a special engraved dog tag that read, “Mike wants to know . . . If you’ll marry him.”

“It couldn’t have been more romantic,” Sdoia said.

The couple plans to have a small wedding this coming fall.

“I do feel that, in a sense, some things happen for a reason,” Sdoia said.

P.S. How long do you think it takes for Mark Wahlberg to pen the script for Patriots Day: 2, centering around this remarkable story? My guess: he already has.