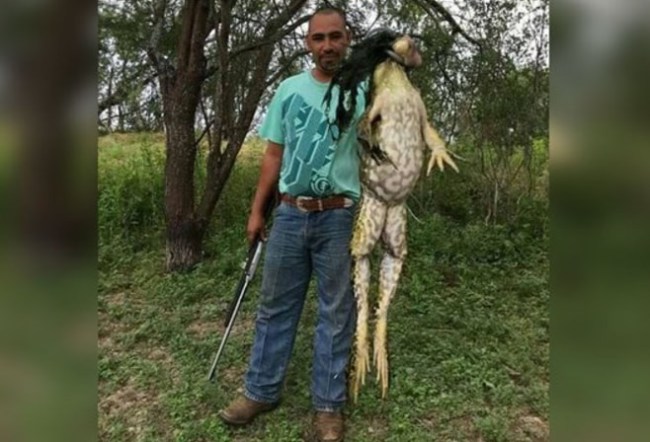 LOOK AT THAT ELEPHANTINE FROG!!! That thing could feed a family of four for a month. However, this enormous bullfrog is sooooooo big that people are questioning whether it is real or fake.

On Thursday, the South Texas Hunting Association posted this photo to their Facebook page of Markcuz Rangel holding the mammoth reptile.

Put a saddle on that monster and ride it into the sunset.

The massive bullfrog he reportedly caught in a Texas fishing pond on a ranch in Batesville.

The bullfrog is so gigantic that people are questioning the authenticity of the photos.

Snopes says that the “photograph showing a man holding a large bullfrog is real.” Buuuuut they also say that “the bullfrog is being held out toward the camera, making it appear larger than usual” and that “this bullfrog does not weigh 13 pounds.”

Texas Parks and Wildlife confirmed that the photos are real, but did also state that it is an “optical illusion created by extending the frog toward the camera.”

So what says you? Is this behemoth bullfrog real or fake?