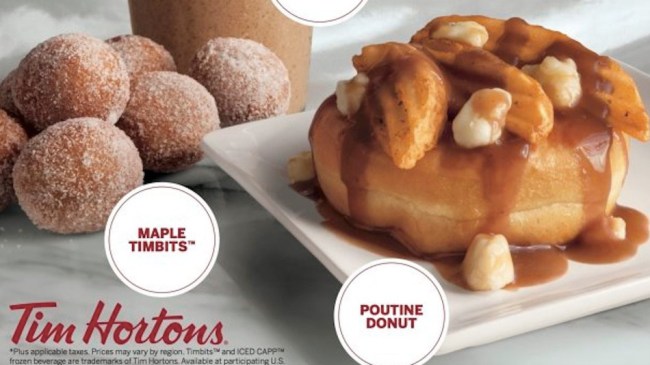 July 1 is Canada Day! This year’s Canada Day is very special since our neighbors to the north will celebrate their 150 years since the country got their full independence on July 1, 1867. Happy 150th birthday Canada! Tim Hortons, which is Canada’s largest fast food restaurant chain, will celebrate Canada Day by taking their delicious donuts and pouring poutine all over that fried yeast circle. The is peak “Eh.” But quizzically, Tim Hortons will not serve their poutine donuts in their Canadian locations and will only be offered in certain U.S. locations.

Tim Hortons is offering up a honey dip donut covered in potato wedges, gravy, and cheese curds. Canadians, you are too kind. “Our new Canadian inspired treats are a great way for Americans to get in on the 150th celebration of their friendly neighbor next door,” Tim Hortons said in a statement.

The special poutine doughnuts will be served to Americans in five U.S. locations: Derby, Hamburg and East Aurora in New York, Rochester Hills, Michigan, and Columbus, Ohio. All of these restaurants are located close to the U.S.-Canada border.

In addition to the poutine donuts, Tim Hortons will also kick off Canada Day with a Maple Bacon Iced Capp, which is topped with whipped cream, maple flakes, and bacon bits as well as Maple Timbits, which are maple flavored bite-sized doughnut holes. All of these super Canadian delicacies will be available throughout the month of July.

Americans have no problems giving ourself diabetes, we don’t need your help Canada.