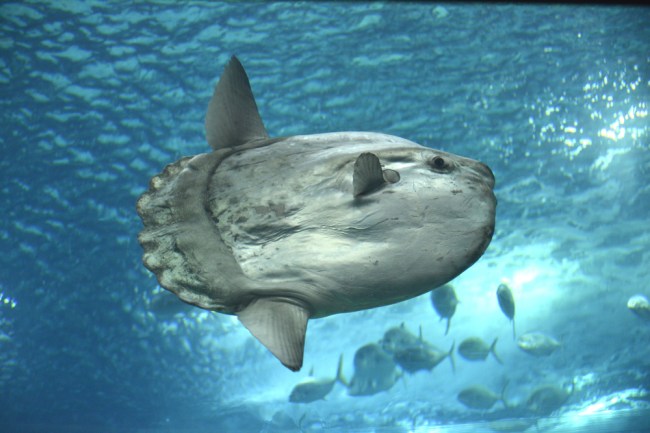 So back in 2015, the Ocean Sunfish, or Mola Mola, picked up a ton of press. All the kids were talking about it. There was Mad Max: Fury Road, the first season of Mr. Robot, the Malcolm Butler interception that ended Super Bowl XLIX, and the Ocean Sunfish, also known as the Mola Mola. Sure, there was other stuff going on that year, but those were the things that really mattered.

Now if you may or may not recall, there was a video that went viral back then in which a Boston bro freaked out at the sight of this particular fish. The ‘Boston Bro Loses His Damn Mind‘ has nearly 4 million views on YouTube all these years later, proving to everyone that great content has no shelf life.

Cut to several years later and it’s still one of my all-time favorite viral videos. I should put in a case labeled “Break Glass In Case Of Emergency” for when I need a pick me up. The video is that good and trust me, it never ever gets old.

However, we are not here to talk about that video, even though I most definitely could talk about that video for hours and after a few drinks, probably have on more than one occasion. No friends, we’re here to call attention to this Facebook rant about the aforementioned Ocean Sunfish (Mola Mola).

I have always been fascinated by this fish and that’s mostly because it looks unlike anything else in the ocean. I’m a sucker for rarities. But after reading this Facebook rant that’s gone viral I’m questioning why the ever-loving fuck such a stupid creature exists in the first place.

So someone in a group asked me to tell them why I hate the ocean sunfish so much, and apparently it was ~too mean~ and was deleted. To perpetuate the truth and stand up for ethical journalism, I’m posting it here. [Rated NC-17 for language.]
Disclaimer, I care about marine life more than I care about anything else, for real. Except this big dumb idiot. And it’s not like an ~ironic~ thing, I mean it IS hilarious to me and they ARE THE BIGGEST JOKE PLAYED ON EARTH but I seriously fucking hate them.
THE MOLA MOLA FISH (OR OCEAN SUNFISH)
They are the world’s largest boney fish, weighing up to 5,000 pounds. And since they have very little girth, that just makes them these absolutely giant fucking dinner plates that God must have accidentally dropped while washing dishes one day and shrugged his shoulders at because no one could have imagined this would happen. AND WITH NO PURPOSE. EVERY POUND OF THAT IS A WASTED POUND AND EVERY FOOT OF IT (10 FT BY 14 FT) IS WASTED SPACE.

They are so completely useless that scientists even debate about how they move. They have little control other than some minor wiggling. Some say they must just push water out of their mouths for direction (?????). They COULD use their back fin EXCEPT GUESS WHAT IT DOESNT FUCKING GROW. It just continually folds in on itself, so the freaking cells are being made, this piece of floating garbage just doesn’t put them where they need to fucking go.
So they don’t have swim bladders. You know, the one thing that every fish has to make sure it doesn’t just sink to the bottom of the ocean when they stop moving and can stay the right side up. This creature. That can barely move to begin with. Can never stop its continuous tour of idiocy across the ocean or it’ll fucking sink. EXCEPT. EXCEPT. When they get stuck on top of the water! Which happens frequently! Because without the whole swim bladder thing, if the ocean pushes over THE THINNEST BUT LARGEST MOST TOPPLE-ABLE FISH ON THE PLANET, shit outta luck! There is no creature on this earth that needs a swim bladder more than this spit in the face of nature, AND YET. Some scientists have speculated that when they do that, they are absorbing energy from the sun because no one fucking knows how they manage to get any real energy to begin with. So they need the sun I guess. But good news, when they end up stuck like that, it gives birds a chance to land on their goddamn island of a body and eat the bugs and parasites out of its skin because it’s basically a slowly migrating cesspool. Pros and cons.
“If they are so huge, they must at least be decent predators.” No. No. The most dangerous thing about them is, as you may have guessed, their stupidity. They have caused the death of one person before. Because it jumped onto a boat. On a human. And in 2005 it decided to relive its mighty glory days and do it again, this time landing on a four-year-old boy. Luckily Byron sustained no injuries. Way to go, fish. Great job.

Wait a second. Could “Scott Burns” be Byron? Hmm. It’s at least worth checking out. But later. There’s more to this rant.

They mostly only eat jellyfish because of course they do, they could only eat something that has no brain and a possibility of drifting into their mouths I guess. Everything they do eat has almost zero nutritional value and because it’s so stupidly fucking big, it has to eat a ton of the almost no nutritional value stuff to stay alive. Dumb. See that ridiculous open mouth? (This is actually why this is my favorite picture of one, and I have had it saved to my phone for three years) “Oh no! What could have happened! How could this be!” Do not let that expression fool you, they just don’t have the goddamn ability to close their mouths because their teeth are fused together, and ya know what, it is good it floats around with such a clueless expression on its face, because it is in fact clueless as all fuck.
They do SOMETIMES get eaten though. BUT HARDLY. No animal truly uses them as a food source, but instead (which has lead us to said photo) will usually just maim the fuck out of them for kicks. Seals have been seen playing with their fins like frisbees. Probably the most useful thing to ever come from them.
“Wow, you raise some good points here, this fish truly is proof that God has abandoned us.” Yes, thank you. “But if they’re so bad at literally everything, why haven’t they gone extinct.” Great question.

Oooh, I think we’re coming on the big finish.

BECAUSE THIS THING IS SO WORTHLESS IT DOESNT REALIZE IT SHOULD NOT EXIST. IT IS SO UNAWARE OF LITERALLY FUCKING EVERYTHING THAT IT DOESNT REALIZE THAT IT’S DOING MAYBE THE WORST FUCKING JOB OF BEING A FISH, OR DEBATABLY THE WORST JOB OF BEING A CLUSTER OF CELLS THAN ANY OTHER CLUSTER OF CELLS. SO WHAT DOES IT DO? IT LAYS THE MOST EGGS OUT OF EVERYTHING. Besides some bugs, there are some ants and stuff that’ll lay more. IT WILL LAY 300 MILLION EGGS AT ONE TIME. 300,000,000. IT SURVIVES BECAUSE IT WOULD BE STATISTICALLY IMPROBABLE, DARE I SAY IMPOSSIBLE, THAT THERE WOULDNT BE AT LEAST ONE OF THOSE 300,000,000 (that is EACH time they lay eggs) LEFT SURVIVING AT THE END OF THE DAY.

#science, am I right?

And this concludes why I hate the fuck out of this complete failure of evolution, the Ocean Sunfish. If I ever see one, I will throw rocks at it.

Well, just be careful. Throw rocks at one of them and just know there’s a million or so more around liable to retaliate.