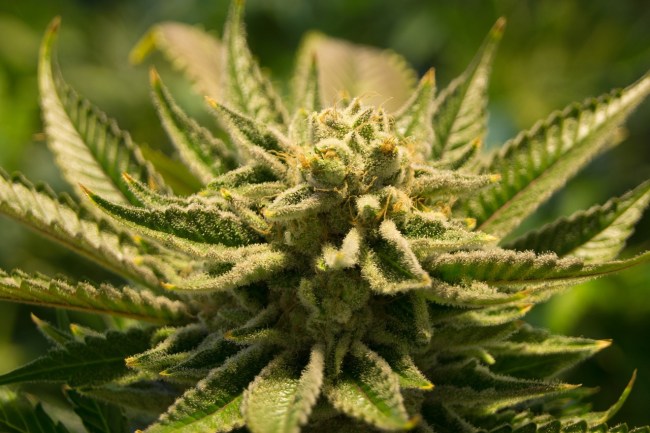 Smoking pot is no longer taboo. Recreational use of marijuana is now legal in Colorado, Washington, Washington D.C., Alaska, and Oregon. We’re living in a world where smoking weed is no longer stigmatized, and this is leading to the meteoric rise of the pot industry.

And thus was born the nation’s first weed critic. Meet Jake Browne, the 31-year-old man who gets paid by the Denver Post to smoke weed and write about as if he was a food critic, and who the NYTimes recently followed for 24hrs to see what a day in the life of a weed critic is like.

Jake is basically living every stoner’s most wild dream right now. He gets paid to go to the dispensaries, talk to the budtenders, go home and smoke, then write about his experience…and after all that he then collects a (probably) fat pay check for doing so. Though they don’t reimburse him for the actual pot, one has to assume that the costs are rolled up into the payment for each review. He’s just living the dream.

I had a similar experience this year when I was able to travel to Denver for 4/20, and the ‘High Times Cannabis Cup’, where I was able to go to the dispensaries, buy a sh*t ton of weed, sample it all, then expense my employer for everything. You can read my exploits from that amazing weekend here, but for now here are a few excerpt from the NYTimes piece.

Jake Browne was seated in a yellow suede chair, carefully rotating a marijuana bud between his fingers. “I’m looking for bugs, mildew, things I wouldn’t want to ingest,” he said, leaning forward to hold the nickel-size flower up to the light. He paused, then took a sip of water from a cup with a Miley Cyrus hologram down its side. “This looks clean,” he concluded.

Mr. Browne, 31, held the bud up to his nose and inhaled. Then he opened his computer. “Faint lemony sweetness,” he typed, before loading the pot into a small glass pipe.

“I usually will take one, maybe two hits,” he said as he fired up the bowl. “I’m looking for how it burns, the taste, if it’s flushed well — meaning you don’t want to taste the fertilizers or chemicals.” He exhaled, waited and then turned to his computer again. “Head high. No initial body effect,” he wrote.

The Post has had two pot critics on its roster since it created a spinoff site, The Cannabist, in December. (The newspaper is searching for a third, as well as a sex columnist to write about pot and intimacy.) While adding the jobs — particularly for a mainstream newspaper — created something of a stir, Ricardo Baca, the newspaper’s newly appointed cannabis editor (and a longtime staff member) said it simply made journalistic sense. “We have a restaurant critic and wine reviewers,” he said. “We have an award-winning craft beer blog. From that logic you do need a pot critic — and maybe a few of them.”

Mr. Browne also has a biological gift of sorts: He is a supertaster. That is, somebody who possesses more taste buds than the average person (at least according to an online survey he took).

In total so far, Mr. Browne has written 27 reviews. He critiqued a strain called Jack Flash (“it practically jumped through my monitor and into my pipe”); 303 Kush (“almost overwhelming”); and wrote about a Willie Nelson-themed varietal called Red Headed Stranger No. 14 (“a little less mentally racy” but with a “strong overall high”). And while his taste buds play a role in the critiques, certainly, there is more to it.

The key to pot criticism, Mr. Browne said, is knowing your audience. While he tries to keep his language basic enough that a nonsmoker could understand it (“I think pot needs smart people to be ambassadors to the masses,” he said), he doesn’t want to be condescending to those who do. “I never want to be that pretentious pot critic,” he said.

The reviews themselves have a certain formula. Mr. Browne begins with a physical description of the product (is it moist, with the THC visible, or a drier, less tightly packed bud?) as well as the smell and taste (“rubber and pepper dominate the jar like a bunch of green army men relegated to miniature mess hall duty,” he wrote recently, of an “unfortunately titled” strain called Alien Napalm).

He will find out where the product was harvested (in Napalm’s case, a “veganic grow”) and tell the reader where he bought it (because each manufacturer has its own wacky strain names). Sometimes he’ll describe the sound of the bud firing up (“snap, crackle, pop”) or what, and how much, he ate after (“apple juice and ants on a log,” he said, referring to the children’s snack of raisins and peanut butter on top of celery).

No, being a pot critic doesn’t pay the bills (nor does The Post reimburse him for the pot). But, Mr. Browne said, it beats working in a coffee shop (where, for what it’s worth, he’d probably have to take a drug test).

“I feel lucky to be this person in the middle of a historical moment, and I don’t think we’ll see anything really comparable to it,” he said, finishing up his day at a taqueria down the street from his house. “And, you know, I like pot, I think it’s a fun topic. Somebody has to cover it. So why can’t I be that guy?”

I don’t know if it’s possible to be any more jealous of a man than I am right now, and I don’t even like smoking pot that much. Just living the beautiful stoner dream…

And now that you’ve read about Mr. Browne’s life, I highly suggest you read up on my experience at this year’s ‘High Times Cannabis Cup’ at the first 4/20 in Colorado where weed was completely legal for recreational usage:

The State Of Marijuana — A 4/20 Experience In Colorado