10 Games to Play at Your 4th of July Party

It’s America’s 241th birthday, which means there’s 241 ways to celebrate the founding of our great nation.241

You’ve got the essentials — beers, burgers and brats — and now all you need is an activity or two to pass the time before the sun goes down and the fireworks are lit.

Thanks to the Founding Father’s vision of life, liberty and the pursuit of happiness, you have an infinite number of options and can carry on in any fashion you deem necessary or worthy.

Whatever it is you end up deciding, make sure that nobody dictates that choice. This party is supposed to pay tribute to democracy so an inclination of fascism, communism or dictatorship should be crushed immediately and mocked consistently.

While there may be some serious debate over which game to play, remember that debates, arguments and compromises are what this country was built upon.

As long as everybody gets a fair and equal opportunity to contribute, then everything should work out just fine. Before long, you will be piss drunk awaiting the firework show.

Note: these are strictly lawn and pool games, so no beer pong, flip cup or Polish horseshoes — seriously, why would anyone play a game with “Polish” in its name on America’s birthday? Seems asinine if you ask me.

Also, fishing and hunting are sadly not included on this list either as they aren’t games or activities you play at a party, though any bro who wants to fish or hunt on the Fourth has my automatic approval.

Without further adieu, here’s a list of 10 games every bro should have available at his Fourth of July party:

America’s pastime remarketed for drunkards and girls to play together on any nice summer afternoon. There aren’t many activities that can top a great game of wiffle ball and as far as I’m concerned, it definitely deserves to be No. 1 on the list of games to play as we celebrate our country’s birth based on in direct lineage to baseball. While one could counter that a game of baseball would be more patriotic, I would argue that aluminum or wooden bats mixed with a pack of wild hooligans in the hot sun is a terrible concoction. Also, every red-blooded American possesses at least a bat and a few wiffle balls — or at least he or she should, which makes this one of the easier games to set up.

In terms of set up, badminton is far from simple, especially after a few drinks. I remember it took my friends and I the better part of an hour to assemble the net and everything else that came with it. However, once erected, the badminton court will yield plenty of great competition throughout the afternoon and potentially the rest of the weekend. If you can commit to it, then it pays lots of dividends such as a badminton tournament. 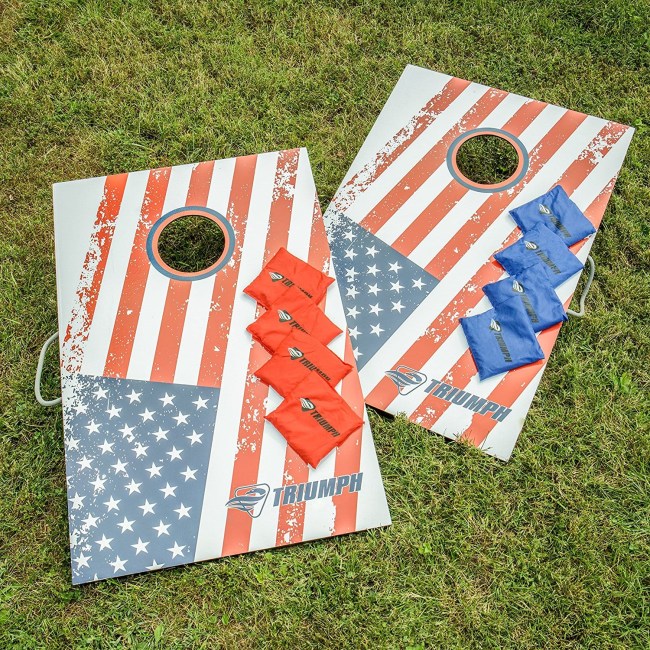 American lawn game at its finest. Many will attest that this is a game of “skill” or “finesse” or even practice, as if it is some high-class sport like golf. In reality, cornhole was invented by a bro who loved bros for other bros who love booze to enjoy. The simplicity of the game is what should be heralded, not its competitive nature or the talent you need to posses to play it. After all, it can’t be all that complicated to chuck a beanbag into a hole, right?

I debated heavily about including this on the list because I’ve always thought of it as more of a Labor Day-type game aimed at bringing people at the end of the summer. It took only one, brief conversation with my friend to see how ignorant that mindset was. Horseshoes always bring Americans together, no matter when or where. The game enables gambling, drinking and hollering — three quintessential American actions. Not to mention, it’s the one game on this list that really promotes mockery between opponents during competition.

Can’t say this is my favorite game and definitely can’t argue for its place in American history; however, it belongs on the list because it goes hand in hand with summer, lawn games and parties. Also, it allows all players to feel as if they’re on the golf course during the holiday, when in reality they’re just in their backyard. Similar to horseshoes, betting on croquet — like any sport — makes the competition all that more exciting.

Bocci ball is the more skilled version of cornhole without the boards and the holes, so sadly no room for sexual innuendos when playing. Although its origins predate to Ancient Rome, I can’t help but feeling the rules and playing field are extremely Americanized. Not to mention, the sport has largely been accepted by our culture, which allows it to be on this list. Who hasn’t played this with family or friends, even if you’re not Italian?

This one could be played in or out of the pool depending on equipment and the number of people willing to participate. I’ve always found pool volleyball excruciating, but it’s probably the best workout of any of the games on this list so if you’re looking to get in some exercise during the holiday this is your game. As for beach volleyball, you will more than likely end up playing this on the grass unless you have sand to make an official court. More than likely, all volleyball players will end up with cut knees and find their way to the pool.

Similar to wiffle ball, everyone at the party can play Frisbee and no matter where you are, the homeowner should have multiple Frisbees. This means two things — one, the set up takes less than five seconds and two, equality reigns supreme. There is no discrimination and no hostility in Frisbee and that’s the widespread appeal.

The old classic from gym class returns to take on its new form as a staple of the Fourth of July celebration. I played an epic game of kickball two years ago on the Fourth and was pleasantly surprised at what a good summer game it was. Although it seems obvious, kickball is often left off the list of party games in favor of more decadent options such as croquet. Anyways, the set up is simple — as simple as wiffle ball — and the competition gets pretty intense around the bottom of the seventh inning. Most importantly, everyone remembers how to play so there’s no gender confusion or separation.

Remember: this is a day about America and in this country we are all equal.

I should probably have this one higher on the list, but it’s not exactly a “game” per se so I left it for the last spot on the list. With that said, every Fourth of July party should include some American trivia to test the partygoers knowledge of this country and its rich history. There are plenty of different trivia sheets available online to print out if you want to go this route at your party. Scoring is pretty simple. The participant either knows the answer and gets it correct or doesn’t and is therefore wrong. Points add up and whoever has the most wins and is the de facto most American person at the party.

Now that’s a title we should all strive to hold this year.