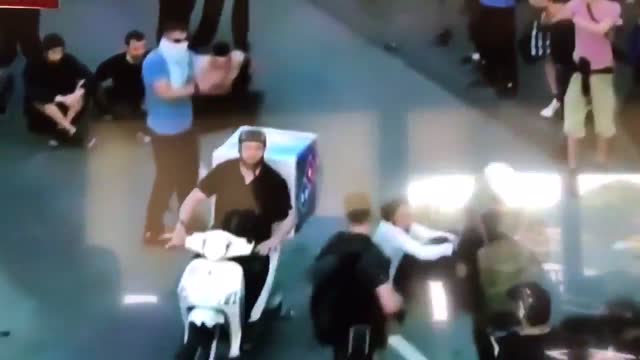 The G20 Summit is happening right now in Hamburg, Germany, where world leaders from major economic powers are attempting to ensure international financial stability. The annual meeting between the leaders of the world’s top economies gather in one room to discuss how to bring about global economic stability as well as other pressing issues of our time. Many have speculated that the first meeting between President Donald Trump and Russian President Vladimir Putin is the most important moment of the G20. Those people are wrong. The most significant moment of the G20 is a brave hero delivering pizzas right smack-dab in the middle of an explosive riot.

While world leaders are discussing the fate of the planet, there are massive violent anti-capitalism protests going on all around Hamburg. The city has deployed 20,000 police officers to quell the violence but that has only resulted in more chaos as at least 130 police officers have been injured. Protestors have tried to shut the G20 down with violent riots that have included burning cars.

Hamburg is on fire. Antifa is mass rioting at #G20 and setting fire to vehicles all over the city. pic.twitter.com/nYHOloWbDZ

This passionate and angry rally is called the “Welcome to Hell” protest. Well, this pizza delivery dude doesn’t give a care what the riots are called or how many vehicles are on fire because he’s got one job – deliver pizzas, and providing warm, belly-filling carbohydrates is what this lionhearted pizza delivery man is going to do. Reddit user coolsubmission caught the moment that the gallant delivery hero navigated his mighty moped through the hordes of riot police, water cannons, and furious protestors.

They really take that “30 minutes or it’s free” deal seriously over in Germany. This is truly a “not all heroes wear capes” moment.

As far as whoever ordered that pizza, nothing says, “Fuck capitalism!” quite like ordering three MeatZZa Pizzas, Garlic Bread Twists, Stuffed Cheesy Bread Bread, and a 2-liter of Coca-Cola from your Apple iPhone and having it delivered to you in the middle of a protest.

Take notes Pepsi and Kendall Jenner, this is how you do successful marketing for your product in a protest setting.

Because this brave pizza delivery guy is the hero Hamburg needs, but not the one it deserves right now.