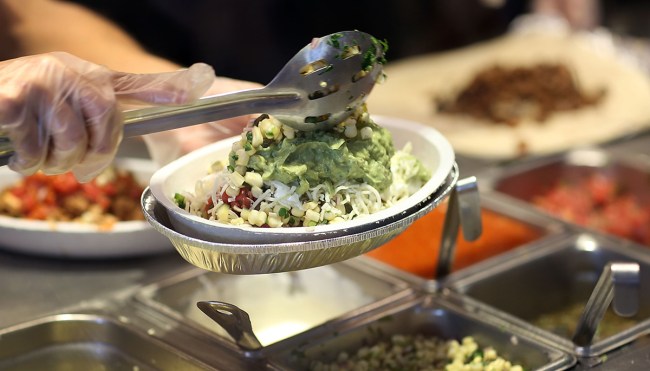 Dylan Grosz might not be a household name, but as far as I’m concerned, the man is a goddamn genius. He may not go down in history as the “second coming of Einstein, but he still deserves to be listed among history’s greatest thinkers.

Why? Well, Dylan figured out a way to inflate your regular Chipotle burrito’s weight by 86 percent, making it a whopping two friggin’ pounds as opposed to…well, do some math, figure it out, then let me know. I’m here to blog, not do math.

How To Maximize Your Chipotle Order For Free

According to the Chiptole guru behind this revelation, all you have to do is ask for a burrito bowl as opposed to a regular burrito, along with two tortillas on the side. So far so good; no extra charges.

The REAL trick is then asking for “both kinds of everything,” meaning you get pinto AND black means, white AND brown rice, plus half and half meats. Finish it up with fajita veggies and corn salad, and *BOOM*, you’re set.

Just how set? Well, the numbers don’t lie when it comes t:

Grosz said he had to wrap the burrito himself with the two tortillas, but it’s worth it as when put on a scale, clocked in at 31.7 ounces, which is almost 2 pounds of Chipotle burrito. That’s 86 percent heavier than a regular Chipotle Burrito.

Now, if you’re like me and don’t like Chipotle burritos because you’re a 12-year-old at heart who only eats quesadillas, this is completely useless information. Take it out back and shoot it in the head because it’s taking up valuable space in your noggin that could be used for important things.

However, if you’re someone who can’t stand having to pay extra at Chipotle when you’re getting your burrito fix…you’re welcome.