This Is The Most Important Skill You’ll Ever Learn: How To Survive A Lion Attack In The Wild

Nobody told lions that human beings are actually at the top of the food chain. When confronted by a defenseless human being in the wild, a lion’s only prerogative is to put some dinner on the table. My goal here is to make sure you DO NOT get eaten by a lion in that situation.

If at any point you’ve ever felt uneasy around a potentially vicious/dangerous dog I want you to consider for a moment that adult lions are between 300-500 pounds, and most adult dogs weigh slightly more than toddlers.

So, how exactly are you going to defeat a lion in the wild when it bares its fangs down upon that throbbing jugular vein carrying all the blood from your head to your heart? Well, you’re going to follow all of the advice outlined in this latest episode of ‘EPIC HOW TO‘ on how to survive a lion attack, duh. I’ll be a nice guy and save you some time from having to watch the entire video though and hit you with some bullet points:

1) Avoid getting into a fight with a lion by dressing in appropriate camouflage because there’s no ‘winning’ in a fight against a lion, there’s only ‘surviving’.
2) No wearing stripes and/or polka dots, or anything that resembles the natural prey of a lion.
3) Never approach any lions that are mid-coitus because lions in the process of f**king are defensive and much more prone to attack. It’s a vulnerable state for them so they’ll react violently in an instant.
4) Avoid all lionesses with cubs. Mama lions will fuck anyone up that gets too close to their babies.
5) Stay away from lions during the nighttime because they’re very active at night and can see you much better than you can see them.
6) Don’t show any fear. This is pretty standard behavior when you encounter nearly every predator in the wild, but lions will feed on your fear and turn you into hamburger meat in an instant if they sense that you’re panicking.
7) Don’t run. There’s a decent chance the lion will chase you and there’s no shot in hell that you’ll be able to outrun a lion because they can run up to 50mph.
8) Stand your ground and pay attention to the lion’s body posture and tail movements. If the lion’s tail is swinging to and fro then you’re fucked. That tail movement means you might be meeting your maker in the very near future.
9) Do the same things you’d do to fend off a grizzly bear. Make yourself as big as possible by standing up tall, puffing up your chest, swinging your arms around, making a little noise. A lion isn’t trying to get his ass whooped so you want to make yourself appear as if you’re fully capable of dishing out dat azz whoopin’.
10) Carry a whistle. Blowing a whistle at the lion will startle it. If you don’t have a whistle to blow you can throw your backpack at the lion because this will also startle it and force the lion to retreat. 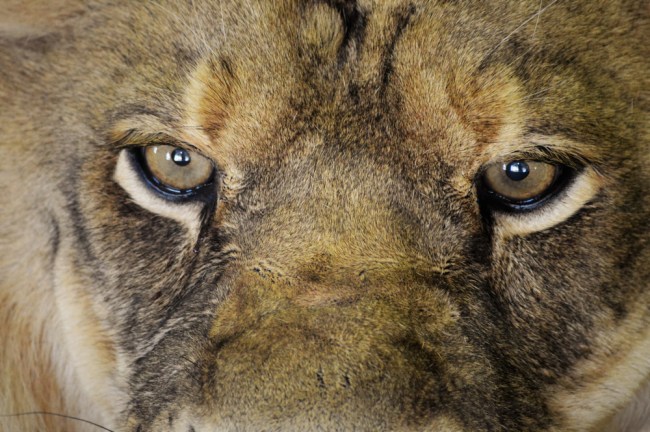