The Fyre Festival was a complete and unmitigated disaster of epic proportions. Anything that could go wrong, did go wrong. Instead of a “luxury” music festival, it was more like an episode of “Survivor.” And just when we thought that all of the horror stories about the Fyre Festival had been told, leaked emails from the organizers of the Lord of the Flies IRL event have been revealed and they show that the shitshow was even shittier than ever imagined.

Leaked emails from the organizers of the Fyre Festival have been acquired and published by Mic. The communications show that “organizers” were anything BUT organized even weeks heading into the weekend of music performances on Great Exuma in the Bahamas. The emails regarding the music festival, which was the brainchild of rapper Ja Rule and tech entrepreneur Billy McFarland, show that there were major issues with housing and bathrooms that somehow turned the beautiful Bahamas into the butthole of Satan.

In an email from April 3, just three weeks before the festival started, there was an email with the subject line of “RED FLAG- BATHROOMS/ SHOWER SHIPPING” sent to McFarland and Fyre Media president Conall Arora. The email highlighted the high costs of shipping toilets to the Bahamas to accommodate the 2,500 festival-goers. Lyly Villanueva, executive producer of the festival, estimated that 125 stalls, or approximately 18 to 20 bathroom trailers, would be required to accommodate everyone at the festival. Arora argued that they could cut costs by not getting as many crappers and instead just have people wait longer in a shit line.

“If we cut it in half, we would just have double the line wait? I’m seeing some sites that say we could get away with 75 toilets,” Arora responded. To which Villanueva retorted, “Please keep in mind those are calculations are for events lasting 8-10 hours with portapotties in grassy fields. This is a ‘luxury’ campsite where people will be using this as [their] only source of relief for 5 consecutive days.” Villanueva then went for the potty humor, “We have to move quick on this or we are in a shitty place, lol. Sorry.”

After the event’s caterer, Starr Catering Group, pulled out of the failed festival, a member of the staff responded in the email thread by saying, “No one is eating so therefore no ones pooping.” This is an innovative and logical workaround to a lack of shitters. 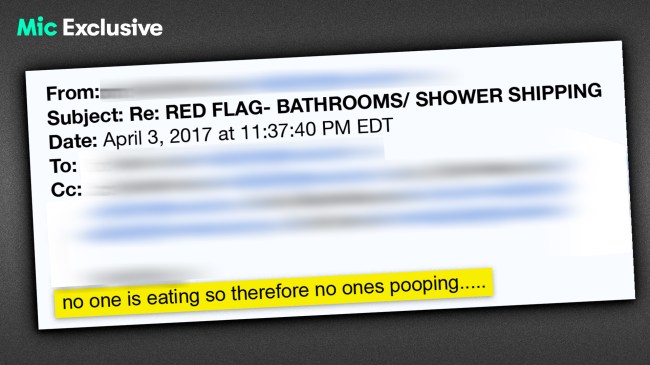 The emails regarding the Fyre Festival, which is otherwise known as the RMS Titanic of music festivals, also revealed that there was a significant lack of housing. The emails show that organizers calculated that nearly 600 people would be without housing. Marc Weinstein, a senior consultant working on accommodations for the festival, informed McFarland and Arora about the insufficient housing and suggested renting a cruise ship for $530,000 to house up to 225 people. As far as the other 368 people who paid their way into the festival with their parents’ hard-earned money, just get rid of them. “I’d start by cutting your 50 lowest paying customers today,” he said. Those 50 lowest paying customers who were cut from the Fyre Festival are also known as “The Fortunate Ones.”

Several lawsuits have been filed against the Fyre Festival organizers, including the festival’s founders Ja Rule and McFarland. The lawsuits alleged that the organizers knew beforehand that the festival would not be able to deliver on their lofty promises and these damning emails definitely support that claim. The FBI is reportedly investigating the dumpster Fyre. The Fyre Festival is the gift that truly keeps on giving.