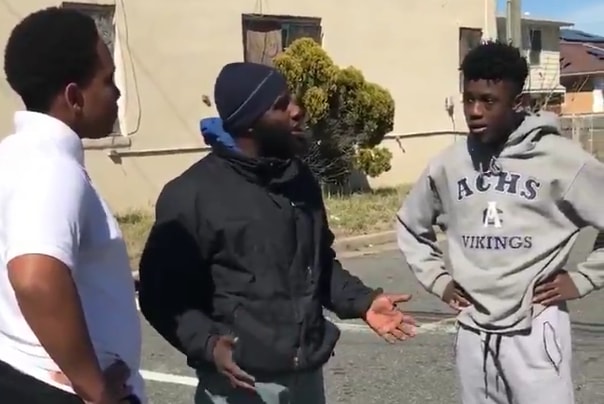 We post our fair share of street fight videos here at BB. In my experience of posting videos, I have noticed that many of the fights are caused or exacerbated by three distinct outside forces: alcohol, girls, or friends. One sage man also noticed that so-called “friends” incite a lot of fights and that they don’t have your best interests. Not only did this gentleman deliver his powerful message to the two teens fighting, but it went viral, and hopefully more fights over some trivial shit can be avoided.

Two youngsters are ready to throwdown in Atlantic City’s Westside as all of their “friends” encourage them to beat the snot out of each other as they record the melee on their phones. Along comes Ibn Ali Miller, a man who also lives in the area to quash the bouhaha.

During the four-minute video, Miller refuses to leave until the two teens stop fighting and shake hands. The man also dispenses some wise words and highlights the fact that their “friends” are laughing at them.

“I’m not leaving until you shake hands. Now look, they want ya’ll to be enemies… Put your hand back out, bro. He’s going to shake it this time, I promise you.”

The video went super viral; receiving tens of millions of views after Marmar Duval shared it on his Facebook page. Because of the moving message, it even got the attention of Lebron James.

So dope!!! #Salute the homie who stepped in and spoke real to our young generation. We all need a word or 2 to help! https://t.co/hJ4BT611sw

We definitely need more of this non-violent mindset and more people like Ibn Ali Miller to spread the important message.