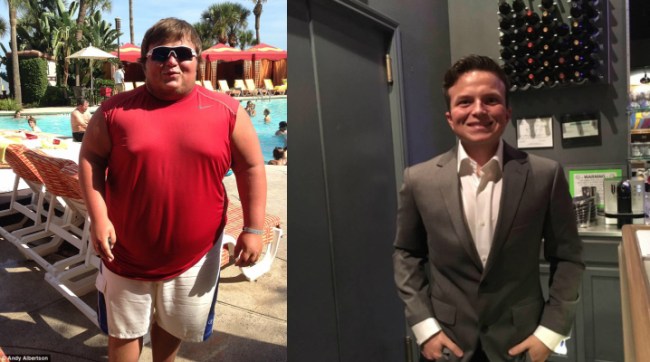 “You get sad so you eat to feel better and then you have eaten, and you feel bad again, and you eat again,” Andy told TODAY.

In junior high, kids made fun of Andy by calling him “Andyopolis,” meaning he was a humungous as a city.

At his heaviest in college, he weighed 317 pounds. But it wasn’t just his body that was suffering, it was also his mind and his confidence that was shattered. He would go to classes early just so that he could sit in the last row so that nobody would be able to see him. 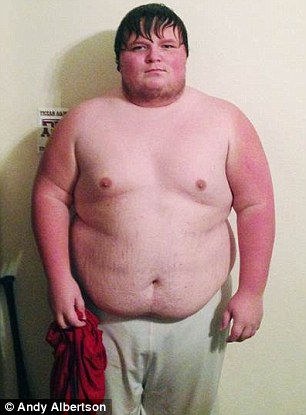 “I used to tell myself, ‘Oh I don’t care what people think. It doesn’t matter.’ But deep down inside … I hated the way I felt and looked,” he said.

But Andy not only broke the cycle, but he smashed it to smithereens.

On January 8, 2015, he started going to the gym and running on the elliptical for an hour a day. The weight started coming off, but he would have issues from time to time. He teamed up with trainer Jerry Hughes, who designed a workout schedule, and they worked out together three days a week.

In less than a year Andy lost 176 pounds! He is now a muscley 146 supernova of willpower and discipline.

“I learned to control my mind. I learned when I am wanting those bad foods, it is just a thought and I am 100 percent in control,” he said.

“I drastically changed the way I thought about food and exercise,” Andy said. “That mindset is what made me so successful.”

He used to skip breakfast, eat fast food for lunch such as a seven-piece fried chicken meal with fries, biscuit and a large soda. Then for dinner he would eat either a “typical Southern home-cooked meal” or fast food or go to a restaurant.

Now he eats between five and six small meals per day of lean proteins, carbohydrates, vegetables, and fruit.

“I am so much stronger physically, mentally, and emotionally than I have ever been,” Andy said.

You can watch Andy’s INCREDIBLE journey in this video.